Donald Trump officially announced his candidacy for president again in 2024 this week, but not all of his supporters wanted to stick around for his entire speech. Unfortunately for them, though, that didn’t matter, as Trump’s security team reportedly blocked anyone from leaving early.

In a video posted by ABC reporter Olivia Rubin, some in attendance at Trump’s Tuesday night announcement were seemingly trying to leave, but being stopped. According to Rubin, “A crowd has formed by the exit of the ballroom as some try to leave Trump’s announcement speech before he has finished…. But security won’t let them”

“Oh damn!” Noah said after taking a moment to laugh out loud. “Say what you will about Trump, but the man takes his border security seriously. ‘Nobody’s getting out! We’re gonna build a wall. Build a wall, keep them in.'”

Speaking more seriously, Noah noted that forcing people to stick around for someone they support isn’t exactly a good sign of the state of things, comparing the rally to a subpar social spot. 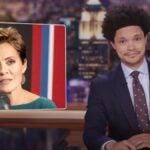 “For real though, you know a club is sh–ty when you need a bouncer to keep people in. That’s when you know things are not going well.”

Noah then harkened back to a favorite chant of Trump and his supporters, regarding Hillary Clinton — only this time, the tables were turned on them. 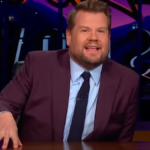 Also Read:
Corden Drags Donald Trump After Losing Ivanka’s Support: Must Be Angry ‘After Getting Rejected by His Crush’ (Video)
x