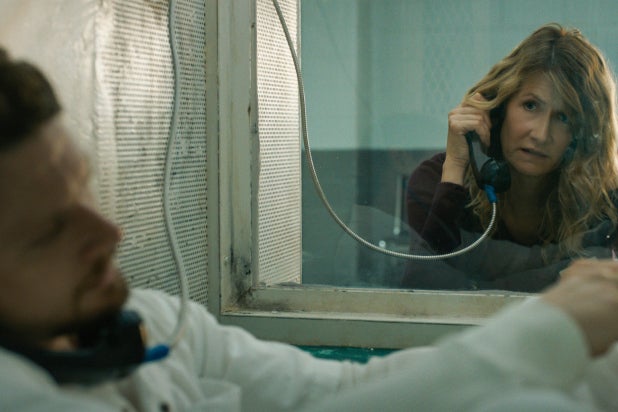 A perpetually alarming issue that merits interminable outrage, wrongful convictions are not news in this country. Innocent people accused of a crime, or at least individuals not dutifully proven guilty beyond a reasonable doubt, face a voracious system where circumstantial variables sway the law more than facts do.

This failure of justice resulting in lives lost to unearned sentences is so pervasive that countless movies (both scripted and non-fiction) populate their own subgenre chock-full of these dispiriting cases. In “Trial by Fire,” the latest fiction adapted from real-life tragedy, despair is amplified by the state of Texas’ fondness of fatal reprisal and right-leaning attitudes.

As a result of a house fire in 1992 — depicted here as a digitally-conceived blaze that’s sure to distract viewers — Willingham, a poor white man, is indicted on arson charges for the incident, which horrifically killed his three children. Based solely on the death metal posters on the walls, his prior record, and disheveled appearance, authorities in the city of Corsicana misinterpret what was likely an accident as intentional murder.

“Fire never lies” Willingham’s prosecutors repeat as a rehearsed catchphrase, despite having no concrete evidence of what actually caused the flames. Willingham’s wife, Stacy (Emily Meade, “The Deuce”), testifies in his defense, but that doesn’t suffice during the religiously coded trial of such a high-profile disaster in a minuscule town. Swiftly, Willingham lands on death row with zilch prospects of surviving and a grotesque new nickname: Baby Killer.

Wisely, Zwick frontloads the film with its most pronounced asset: O’Connell’s committed interpretation of a simple man staring into an inescapable abyss. That strategy succeeds at partially dissuading attention from its other, much less praiseworthy features, namely hackneyed lines invoking run of the mill melodrama.

Flashbacks to O’Connell’s phenomenal work in “Starred Up” are mandatory, as he once again walks in the beaten shoes of an inmate adapting to his precarious environment. But while that more naturalistic production traded in unabashed violence, his duty for Zwick is to nail the twang without caricaturing it and, most significantly, to carry his character through several stages of grief for his own destroyed life and those of his daughters. The actor’s nimble intuitiveness to sail back and forth between anger, hopelessness, and determination cuts through the inspirational platitudes he’s constantly charged with conveying.

Although top-billed in all promotional materials, Laura Dern arrives relatively late into the picture as Elizabeth Gilbert, a published author and divorced mother of two. While her first contact with Willingham may have happened serendipitously in reality, on screen it manifests with contrived convenience: Gilbert helps a random lady with car trouble who somehow sensed she would be willing to correspond with a death-row prisoner.

By now it should be a written law that including Dern gives any project an unfair advantage. In her alchemist hands, any role even if encrusted into a piece of dirty coal, radiates with golden luminosity. There’s a kindhearted resolve to Dern’s Gilbert that’s easy to get behind because her quest is righteous even if her intentions are seldom questioned (mostly by her teenage children, who feel neglected). With gracious charisma, the superb actress polishes the limiting part as close to a diamond as possible.

What’s most disingenuous about “Trial by Fire” is that it knowingly simplifies the institutionalized and ingrained biases that foster the very matter it’s trying to address. This is a white-on-white savior story where the divide resides in class and not race, which is noted only in hacky speeches. Parallels are drawn between Willingham’s oppressive isolation and Gilbert’s quaintly unsatisfying existence as if they existed on a similar plane.

Their letters materialize in magical realist vignettes where he’s seen in her kitchen observing her routine, and vice versa with her appearing in the halls that will lead to his final breath. Far from novel, these sequences are still more vividly evocative than plain dialogue demanding our tears. This visual tactic is employed again to have O’Connell’s Willingham atone to his eldest child, which yields less fortunate results.

On death row, Willingham befriends cell neighbor Ponchai (McKinley Belcher III, “The Passage”), a black man who admits he is guilty but debates whether there was premeditation in his actions. Zwick’s movie takes this and — rather than analyze how justice has ill-served both men in distinct ways according to the color of their skin — preaches instead that they are both there simply because of their economically disadvantaged backgrounds. There’s no diligent white person fighting for Ponchai or writing him encouraging letters; he is condemned to perish without fanfare like so many others because the benefit of the doubt is also racially conditional.

Ultimately, even if “Trial by Fire” refuses to examine it, the main lesson that should be burned into one’s mind from Zwick’s coarse exploit is that if this is what a somewhat Christian, straight white man could potentially encounter given the preconceived notions others have of him — in a world where those who look like him are usually at the top of the power ladder, regardless of socioeconomic position — imagine what the rest of us can expect.