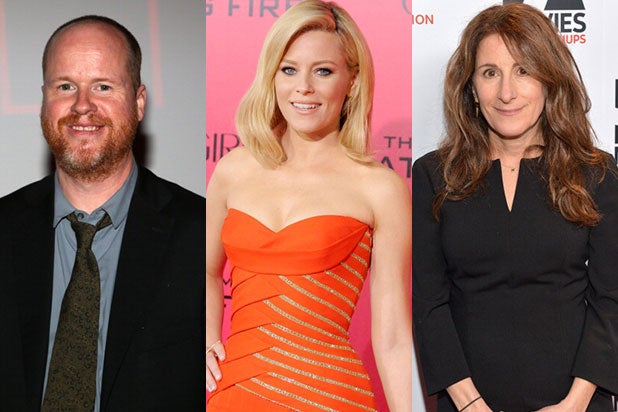 The New York City indie fest, which begins in April, announced the second half of its slate on Thursday, with several marquee talents set to premiere films during the 11 day run, including established directors who are serving as screenwriters this time around.

Joss Whedon, whose attention has largely turned to the Marvel Universe, is the writer behind the Brin Hill-directed film “In Your Eyes,” which features Zoe Kazan as “East Coast housewife Rebecca who lives a comfortable, sheltered life, but always knew there was something special about herself” whose world collides with “charismatic ex-con Dylan” played by Michael Stahl-David.

Meanwhile, Nicole Holofcener penned the screenplay for Amy Berg’s adaptation of the  novel “Every Secret Thing,” about crime and forgiveness in a Baltimore suburb. Elizabeth Banks, Diane Lane, Dakota Fanning, and Nate Parker lead the cast of the film, which makes its world premiere at Tribeca.

Roman Polanski will send a project to the festival, as his adaptation of the play “Venus in Furs” will play at Tribeca (though presumably, he won’t be there to support it).

“The Mindy Project” star Chris Messina makes his directorial debut with “Alex of Venice,” which stars Mary Elizabeth Winstead as a workaholic environmental lawyer whose husband, played by Messina himself, asks for a break and throws her world into chaos. Don Johnson plays her father.

“Friends” and “Cougar Town” star Courteney Cox also makes her directorial debut, with “Just Before I Go,” which features Seann William Scott as “Ted Morgan, a down-on-his-luck everyman who has decided he’s had enough of the hard knocks life has thrown his way. But before saying his final adieu, Ted returns to his hometown to right a few wrongs.”

Also announced were films in the Midnight category, as well as projects in Storyscapes, which “showcase innovative and interactive transmedia work across genres.”

“All About Ann: Governor Richards of the Lone Star State,” directed by Keith Patterson and Phillip Schopper.

“Keep On Keepin’ On,” directed and written by Alan Hicks, co-written by Davis Coombe.

“The One I Love,” directed by Charlie McDowell, written by Justin Lader, starring Mark Duplass and Elisabeth Moss.

The Other One: The Long, Strange Trip of Bob Weir, directed by Mike Fleiss.

“The Search for General Tso,” directed by Ian Cheney.

“Slaying the Badger,” directed and written by John Dower.

“The Canal,” directed and written by Ivan Kavanagh.

“Der Samurai,” directed and written by Till Kleinert.

“Extraterrestrial,” directed by Colin Minihan, written by The Vicious Brothers.

“Circa 1948,” Project Creator: Stan Douglas with the NFB Digital Studio.

“A Brony Tale,” directed by Brent Hodge, written by Ashleigh Ball and Hodge.

“Journey to the West” (“Xi You”), directed and written by Tsai Ming Liang.

“This Time Next Year,” directed by Jeff Reichert and Farihah Zaman