The Los Angeles Raiders were a team with an attitude, which is why Ice Cube loves them to this day. The National Football League team may have moved back to Oakland 16 years ago, but as far as the rapper turned movie star is concerned, they still belong in his hometown, L.A. 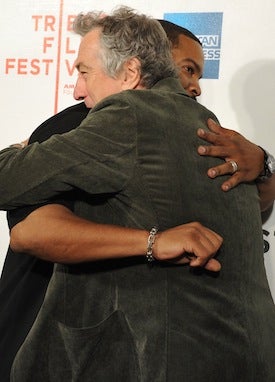 Cube (at left with the fest’s Robert De Niro; Getty Images) pays tribute to the Raider’s years as an L.A. team, from 1982 to ’94, in "Straight Outta L.A.," a documentary film which had its premiere Friday night . The 51-minute film, which Cube directed, narrates and appears in, was made for ESPN and will debut on the TV sports channel on May 11.

In the movie, Al Davis, the longtime and controversial Raiders owner, tells Cube that if the city of L.A. would just build him a new stadium, he’d move the football team back.

During a post-screening Q&A with the audience, Cube said, only half-jokingly, "That’s what I got to do when I go home: get a Build a Stadium in L.A. campaign going."

Cube’s thesis in "Straight" is that the Raiders’ glory years in L.A – when the proudly rough-and-tumble team was consistently making the playoffs and winning Super Bowls – coincided with, and were intertwined with, the birth of and then rise in popularity of the city’s "gangsta rap" hip-hop style.

He knows whereof he speaks since gangsta rap was pioneered by N.W.A., the influential rap group whose founding members included, among others,  Cube, Dr. Dre  and M.C. Ren.

"The Raiders changed the rules of the game, and so did hip-hop," Cube says in the film. The intersection came when N.W.A. members took to wearing hats and clothing bearing the Raiders’ logo and in the Raiders’ signature colors, black and silver.. A generation of hip-hop fans quickly followed the groups lead. 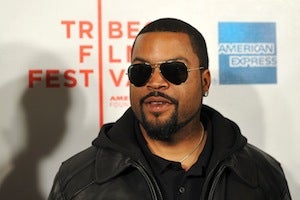 The Raiders were known for their muscularly impolite style of play and that is what attracted Cube and other hip-hop artists, who’d grown up in tough L.A. neighborhoods such as Compton, to them.

As fellow rapper and Raiders fan Snoop Dog says in the movie, "Their logo was  a pirate and they had that pirate attitude. It was like, ‘We’re here to take what we want, by any means necessary.’ "

It was that very attraction, along with losing games, that contributed to the team’s downfall in L.A.  Unruly fans took too beating each other up at the stadium and on the streets, with a noticeable increase in muggings aimed at relieving the wearer of a shiny black Raiders jacket.

In 1995, Davis moved the team back to Oakland, where they remain to this day.

Die hard N.W.A. fans will be pleased to hear that Cube, in his post-screening remarks, said that he and Dr. Dre (who doesn’t appear in "Straight") are continuing to work together on getting "Straight Out of Compton," an N.W.A. biopic, off the ground at New Line Cinema.