“The Killer Inside Me” (below), a brutally noir which stars Casey Affleck, Kate Hudson and Jessica Alba and is based on the hard-boiled Jim Thompson novel, drew wildly disparate reactions when it screened at the Sundance Film Festival. “Micmacs,” the latest film from Jeunet, is a slapstick fantasy that was compared to the work of Buster Keaton by the Hollywood Reporter. 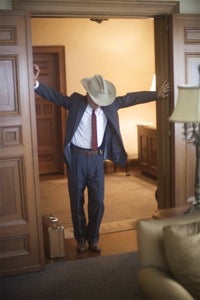 Academy-Award-winning documentarian Alex Gibney (“Taxi to the Dark Side”), whose “Untitled Eliot Spitzer Project” is also showing at Tribeca, will also be represented by “My Trip to Al-Qaeda,” his film version of Lawrence Wright’s one-man play. Oscar-winning director Chuck Workman introduces “Visionaries,” his new documentary about avant-garde film.

The Encounters section is made up of 14 films, six documentaries and eight narrative features. They include “Climate of Change,” narrated by Tilda Swinton; “Every Day,” a family drama from Richard Levine; “Meet Monica Velour,” in which Kim Cattrall plays an ‘80s soft-core icon; and “sex & drugs & rock & roll,” for which Andy Serkis (below right) received a BAFTA Best Actor nomination for playing Ian Dury.

Discovery films include “Arias with a Twist: the Docufantasy,” about the downtown New York art scene; the Brazilian romantic comedy “Elvis & Madonna”; “The Infidel,” a comedy in which a young Muslim discovers he’s adopted, and was born to a Jewish mother; and “The Sentimental Engine Slayer,” the directorial debut of Omar Rodriguez from the band The Mars Volta.

The Cinemania section contains six films. Three are Asian, including “Clash (Bay Rong),” the top-grossing Vietnamese film of the past year. The others include an ‘80s style dance movie, Spork”; a Irish-set film about a smalltown family and their alien visitor, directed by John Carney (“Once”) and Kieran Carney; and a campy exploitation flick, “Ticked-Off Trannies with Knives.” 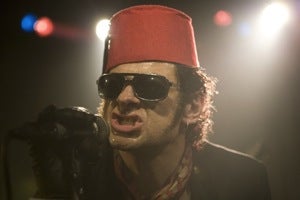 Spotlight is a section comprised of nine films that have distribution deals, among them “The Killer Inside Me”; “Get Low,” featuring an acclaimed performance by Robert Duvall; “Please Give,” for which director Nicole Holofcener and stars Catherine Keener and Oliver Platt drew raves at Sundance; Neil Jordan’s “Ondine,” in which Colin Farrell plays an Irish fisherman who appears to catch a mermaid; and the documentary “Joan Rivers – A Piece of Work.”

For the first time, in addition to screenings in lower Manhattan, video-on-demand screenings will be held on cable and satellite of 12 of the films to begin the same day as their festival debuts. And a Tribeca Film Festival Virtual will enable viewers to see films, panel discussions and Q&As, and other aspects of the festival on the Internet.

Entries in the short film program will be announced on March 18.

The Tribeca Film Festival was founded in 2001 by Robert Ne Niro, Jane Rosenthal and Craig Hatkoff. A for-profit organization, it has in the past been criticized for the high price of its tickets. This year’s tickets cost $16 for evening and weekend screenings and $8 for daytime weekday and late-night films, a drop from past prices.

For information on the selected films, and on ticket packages and individual tickets, go to www.tribecafilm.com.

The latest films to be announced: