The highly anticipated film — it’s from writer-director Olivier Dahan, who made the successful 2007 Edith Piaf biopic, "La Vie En Rose" — had its premiere screening Thursday night at the Tribeca Film Festival and its first press and industry screening Friday. 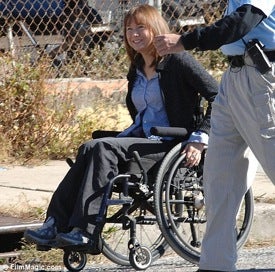 The p&i screening was heavily attended by representatives from indie distribution companies because the 105-minute drama, which is being sold by Kinology, was up for U.S. acquisition.

No one seemed in a hurry to bite afterward — and certainly no one jumped up in the middle, cellphone in hand, to make a pre-emptive bid.

Possibly the attendees were all Bob Dylan fans. The scratchy-voiced singer, who won an Oscar in 2000 for his tune in "Wonder Boys," warbles a couple of new songs in "Song."  Zellweger sings as well, belting out Woody Guthrie’s "This Land Is Your Land" and other original tunes.

The French-financed film is a road picture set in the U.S. about a former singer (Zellweger), who has pretty much given up on life since ending up in a wheelchair after a car accident. Her best pal (Whitaker), who talks her into taking a trip from Kansas to Louisiana, is a mentally unstable fellow who sees and talks to angels. And a  dissolute-looking Nick Nolte turns up midway as blues guitarist.

Also attracting interest from buyers was the P&I screening this morning of "Beware the Gonzo," a teen comedy that’s the first feature written and directed by Bryan Goluboff,  who has worked on HBO’s "In Treatment" and did the screenplay for "The Basketball Diaries"  (1995). The ensemble comedy is about warring high school journalists and the cast includes Ezra Miller ("City Island"), Jesse McCartney, Amy Sedaris and Campbell Scott.

I missed the screening but heard afterward from a few buyers who did see it that "Gonzo" was minor, but fun. The 94-minute film is repped by Paradigm.