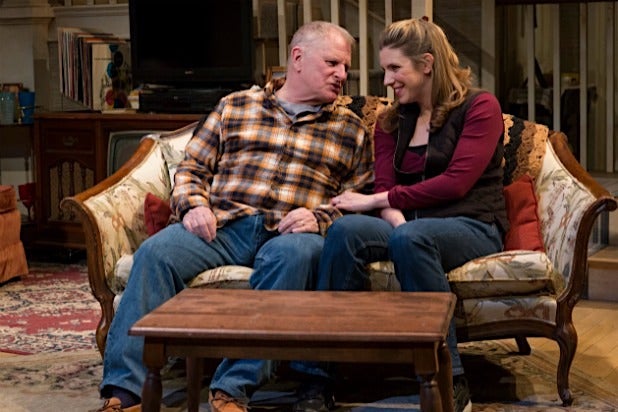 It takes Eugene O’Neill nearly four hours to reveal that Mary Tyrone is a closeted drug addict in “A Long Day’s Journey into Night.” Jack Neary takes only 100 minutes — including an intermission — to deliver far more reveals, a few of them false, in his new play, “Trick or Treat,” which opened Sunday at the 59E59 Theater.

In the first act of “Trick or Treat,” which takes place on Halloween, Neary maintains an uncomfortable balance between farcical comedy and kitchen-sink drama. The jokes about Justin Bieber and the Kardashians seem forced coming from the mouth of the 60-something father, Johnny (Gordon Clapp), who relishes dishing out supersize candy to all the kids in the neighborhood. Clapp convincingly plays this latter-day Archie Bunker who dotes on Tucker Carlson. But then he quickly, too quickly for the good of the play, makes a bold confession to his adult daughter, Claire (Jenni Putney). He embellishes it with scatological details that more than squelch any laughter despite the noisy appearance of a nosey neighbor, Hannah (Kathy McCafferty), who smells something foul afoot, and her old boyfriend, Johnny’s hothead cop-son Teddy (David Mason), who clearly has anger management issues not only on the job but with Hannah.

Carol Dunne’s direction never finds the right focus in this short but confused first act. Then again, her actors have been given the near-impossible task of having to play high drama in an absurd situation with a few sit-com jokes thrown in the mix. It’s a little like watching “Arsenic and Old Lace” if one or both of the aunts had Alzheimer’s and wore Depends.

What Neary does pull off with complete success is the surprise appearance of the play’s most talked-about character. It’s the kind of coup de théâtre that can only be followed by a quick blackout and that aforementioned intermission. For the next 15 minutes, the theater buzzes with, “I didn’t see that coming!”

The New York stage is currently overcrowded with mentally challenged women. In “The Ferryman” and “Girl From the North Country” (to reopen, on Broadway, this spring), we’re treated to elderly female characters who exhibit a kind of magical Alzheimer’s that gives them great wisdom, as well as the power to see the future. Nancy in “Trick or Treat” is closer to Gladys in “The Waverly Gallery,” the role now essayed by Elaine May on Broadway. Kathy Manfre in “Trick or Treat” is nearly as good as May, and helps to ground the far more stable second act of Neary’s play.

Gone are the jokes about pop stars, but the twists in the plot keep piling up, pushing “Trick or Treat” into soap-opera territory. Mason is so effective as the cop-gone-wrong that we almost believe he could cause so much havoc. But much of that havoc comes from there being way too much plot.