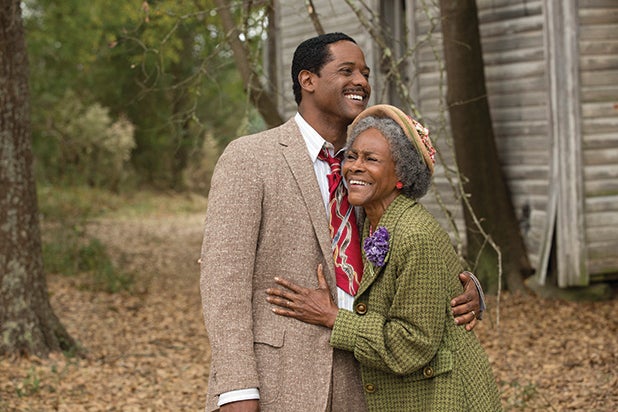 When Cicely Tyson learned that “The Trip to Bountiful,” the Horton Foote play that earned her a Tony, Drama Desk and Outer Critics Circle Award, would be heading to Lifetime television, she was immediately skeptical. “I was terrified when I heard that they were about to do that, and I didn’t see how it was possible,” Tyson told TheWrap.

Foote’s work began life as a television play in 1953; it went to Broadway the following year, and then was adapted for a 1985 big-screen version that won Geraldine Page the Oscar for Best Actress. But Tyson first came to the project in its 2013 Broadway revival, which was directed by Michael Wilson and starred Tyson as Carrie Watts, who embarks on a journey back to her hometown of Bountiful against the wishes of her son, Ludie (Blair Underwood) and his snooty wife, Jessie Mae (Vanessa Williams). Along her journey through the Jim Crow South, Carrie finds unlikely accomplices.

“I had no choice, and so I went along with it,” said Tyson. “But it was with great agony, because I kept questioning whether I was able to contain the character that I had created for the stage–the substance of her, the flavor of her, the being of her–and reduce it to virtually nothing. Because less is always more on the small screen, and after having been so expansive as Carrie [on stage], I just didn’t think it was possible.”

Tyson said she and director Wilson, who also moved from the Broadway revival to the Lifetime movie, went “toe-to-toe” at first. “She felt she couldn’t go quite as far as she had on stage,” Wilson said. “But then she realized and had the confidence in me telling her that, for her to turn to the camera and lift her eyebrow, or do a small smile, a frown, or shake her head gently, it just speaks volumes.”

Tyson agreed. “I finally was able to garner the confidence in the fact that they knew exactly what they were doing, and so I was able to let go, and relax, and just let God have it, so to speak.”

Williams, who also starred in the stage play, had her own adjustments to make in her performance, as Wilson honed in on Tyson’s character and her journey for the TV movie. “I think it was my job to kind of compact [my character’s] backstory into what I could do on screen,” she said. “And then just technically, I had to bring down my volume, because I was used to seven months of projecting on stage, which was
already in my bones playing eight shows a week.”

When it came to the bigger picture, Williams, unlike Tyson, believed in Wilson’s deep knowledge of Foote’s work. “He is a Horton Foote aficionado,” she said. “There’s a trust factor there. Whether it be on stage or on screen, you know that there’s never going to be any compromise in what the true intent was.”

For his part, Wilson remembered seeing the original “Bountiful” film when it came out in 1985. Two decades later, he worked on a stage production with assistance from Foote himself–and then got on board again with last year’s Broadway revival. All that time spent with the writer gave Wilson a shorthand for what was central to Foote’s story, which gave him a compass in making decisions as to what should stay and what could go.

Tyson has yet to watch the finished product herself. “I don’t watch my own work. I do it for my audience,” she said. “The gratification, for me, comes in the doing of it.”

If Tyson were to earn an Emmy nomination for “Bountiful”–which, after all, has brought its leading ladies Tonys in 1954 and 2013 and an Oscar in 1985–it would be her 10th nod from the Academy. And it would come exactly 40 years after her first two nominations, and wins, for “The Autobiography of Miss Jane Pitman” in 1974. But the actress isn’t letting herself get caught up in the awards.

“The one thing I can honestly say is that I never expect anything,” she said. “That, I was taught by my mother.”