Actors like to work. Screenplays can be great on paper but then turn into something disastrous on their way to becoming movies.

Those two sentences became my personal mantra the deeper I got into “Triple 9,” a howlingly inane movie that somehow managed to collect an impressively A-list cast on its way toward becoming a cop movie that’s not just dumb, it’s disastrous.

Future film historians may well wonder whether it was the original version of the screenplay by first-timer Matt Cook, or the promise of working with director John Hillcoat (“The Road”), or favors owed to its producers that attracted so many high-powered performers to “Triple 9,” but the result is an embarrassing police-corruption-Russian-mafia-high-stakes-caper movie that goes from humdrum to downright stupid.

Michael (Chiwitel Ejiofor) pulls off a bank robbery with a team of professionals: Russel (Norman Reedus), like Michael, is ex-Special Forces, Marcus (Anthony Mackie) and Jorge (Clifton Collins Jr.) are police officers, and Russel’s twitchy brother Gabe (Aaron Paul) was drummed off the force. For Michael, the job is personal: rather than money, the real goal of the job was to get a safe-deposit box that puts mob boss Irina (Kate Winslet) one step closer to springing her husband from a Russian prison.

Irina’s sister Elena (Gal Gadot) has a child with Michael, and Irina is keeping the kid close to her to force Michael’s hand; he thinks this heist will square things between them, but Irina has one last job for him, one that involves breaking into an impenetrable Department of Homeland Security facility. The only way his team can pull that off is by pulling a “triple-nine,” code for “officer down.” With all the nearby police distracted by the shooting of one of their brothers in arms, they reason, the less likely they’ll respond to the DHS hold-up.

Marcus finds a prime candidate for the 999 victim: upright new partner Chris (Casey Affleck), who’s just transferred in from a cushier division, over the objections of Chris’s alcoholic uncle Jeffrey (Woody Harrelson), himself a sergeant-detective. There’s the making of an intriguing tale here, and this is the kind of cast that could make it transcend genre limitations, but the more complicated the plotting gets, the dopier the storytelling. 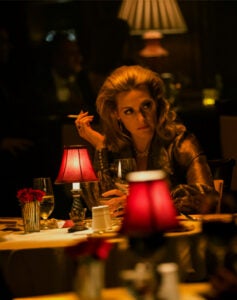 Hillcoat initially seems interested in procedure — an early sequence in which Chris leads a squad of cops through a suspected drug dealer’s apartment takes us through every step of a room-by-room sweep — but by the third act, details like handwritten notes and fingerprints go completely ignored by the bad cops, despite the fact that they’re supposed to be savvy professionals.

We get two climaxes, both of them botched; one major event is tossed off in the background like an afterthought, and the other one makes absolutely no sense in terms of who’s supposed to be where. By that point in the movie, however, almost none of the other story ideas have been nurtured or maintained, so why expect the details to be handled better than the broad strokes? (Regarding one plot twist, Harrelson’s character notes, “That’s just too coincidental,” an on-point bit of self-reviewing if ever there was one.)

The actors mostly muddle through without embarrassment, with the singular exception of Winslet; all the subtlety she brought to her Polish-accented role in “Steve Jobs” is missing in her turn as a Russian émigré, and she chews the scenery, with her giant blonde hair and gold Star of David pendant leading the way. It’s one of the more outsized turns from a distinguished British actress since Kristin Scott Thomas‘ bad mommy in “Only God Forgives.”

In a just universe, “Triple 9” would have gone straight to DVD with a far less distinguished ensemble of actors. If there’s a police code it merits, it’s a “10-22”: “Disregard.”