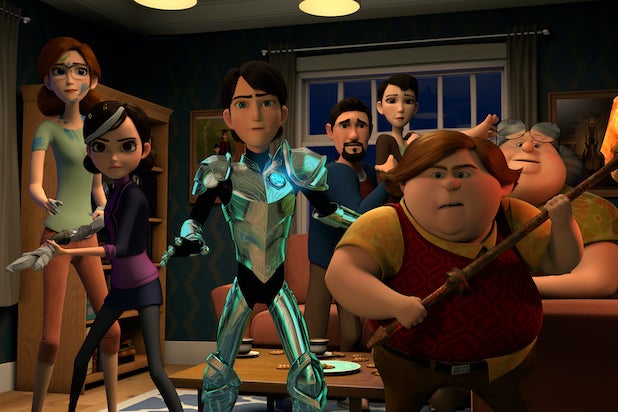 “Trollhunters: Rise of the Titans,” an animated feature film based on the Tales of Arcadia trilogy of animated series created by Guillermo del Toro, is in the works and will land on Netflix in 2021, Netflix announced Friday.

The third series in the trilogy “Wizards” launches on Netflix Friday, and the new film from DreamWorks Animation will be a team-up of the characters in all three series in the Tales of Arcadia universe, including “Trollhunters,” “3Below” and “Wizards.”

“Trollhunters: Rise of the Titans” is in production now and is executive produced by del Toro. Johane Matte, Francisco Ruiz Velasco and Andrew L. Schmidt directed the new film that was written by Marc Guggenheim, Dan Hageman and Kevin Hageman.

“Rise of the Titans” is set in the suburb of Arcadia, which may look like an ordinary town, but it lies at the center of magical and mystical lines that makes it a nexus for battles among otherworldly creatures including trolls, aliens and wizards. Now the heroes from all three series have to team-up in order to fight the Arcade Order for control over the magic that binds them all.

“Team Trollhunters committed, about a decade ago, to try and push the boundaries of 3D CGI animation made for TV,” del Toro said in a statement. “We made decisions from the get-go regarding every asset and every audiovisual decision. We outlined a vast trilogy of interconnecting mythology and characters that we always hoped could culminate with a massive ‘all-stars’ reunion. Fortunately for us, DreamWorks Animation and Netflix both shared the very ambitious notion of doing the three series, interwoven and then finishing off with a bigger, epic-sized feature film to top it all off.  We wanted the feature to improve and expand but to also deliver more scope, more spectacle- more emotion too.  We are very proud of the ‘Tales of Arcadia’ and extremely eager to deliver this spectacular finale for the audience.”

“Trollhunters” first premiered in December 2016 with 26 episodes and debuted two more parts, including in 2017 and 2018. The series was set in a fictional suburb and followed a boy and his two best friends that their town shelters a hidden battle between warring trolls. “3Below” then debuted in Dec. 2018 and followed two teenage aliens who crash land in Arcadia and try to blend in with humans while evading intergalactic bounty. The second part of the series debuted in July 2019.

Finally “Wizards,” which premieres Friday with 10 episodes, follows a wizard-in-training who teams up with the heroes of Arcadia on a time-bending adventure to medieval Camelot. Their journey leads to an apocalyptic battle for the control of magic that will determine the fate of these supernatural worlds that have now converged.

The first season of “Trollhunters” won six Creative Arts Daytime Emmys in 2017, including for del Toro for direction of an animated program and for voice acting from Kelsey Grammer, who is returning for the feature film.