The constantly glitching third “Tron” sequel flickered out at Disney when the studio landed bigger, shinier franchises like Marvel and “Star Wars,” “Tron: Legacy” director Joseph Kosinski said in an interview with Vulture.

Perhaps now better known as the director of “Top Gun: Maverick,” Kosinski said a three-quel called “Tron: Ascension” was fully written and storyboarded before it was de-rezzed. The script turned the “Tron” concept inside-out by bringing computerized characters out into the real world – an idea that the 2010’s “Legacy” spent much of its runtime setting up, as the film ended with grid-only character Quora (Olivia Wilde) arriving on Earth’s material plane.

The $400 million global box office haul for “Legacy” wasn’t enough to get an immediate greenlight for a third film, Kosinksi said especially after Disney acquired other high-profile sci-fi and action franchises. “Legacy” was a success by all standards of a “cult hit,” however, from its glassy, glow-in-the-dark stylings to an exhilarating soundtrack by Daft Punk – but for now, it stands as the franchise’s end of line. 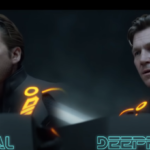 “I got so close. I really tried,” Kosinski said. “I got close in 2015, and Disney pulled the plug on it. I hadn’t built anything, but I had the whole movie storyboarded and written. … But it was a different Disney by 2015. When I made ‘Tron: Legacy,’ they didn’t own Marvel; they didn’t own ‘Star Wars.’ We were the play for fantasy and science fiction. And once you’ve got those other things under your umbrella, it makes sense that you’re going to put your money into a known property and not the weird art student with black fingernails in the corner — that was ‘Tron.'”

That’s not at all to say Kosinski regrets what Tron had become. “Had I made ‘Tron: Ascension,’ I wouldn’t have made ‘Only the Brave,’ and I wouldn’t have made the movies I made. But remember, the first ‘Tron’ (1982) was not a hit when it came out. It’s a cult classic. And if ‘Tron: Legacy’ is becoming the same thing, I couldn’t be more thrilled.”

A different concept for a “Tron: Legacy” follow-up, with Jared Leto attached to a script development apart from the Kevin Flynn (Jeff Bridges) saga, seems to be set deeply back on a high shelf at Disney for now. Meanwhile, Kosinski is just happy that “Legacy” ever materialized in the first place.

“To pitch to Disney at that time that we were going to make a $150 million movie with a first-time director, a first-time production designer, actors that had never been in a big movie before, and a score by a French electronic duo that did dance music and literally dressed up as robots … I mean, I just can’t believe they said yes. I don’t think that movie would get made today.”