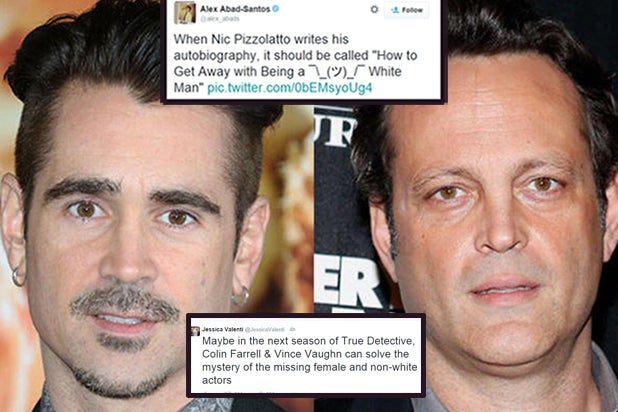 Some fans worried that casting Farrell meant the show would turn into a “Miami Vice” sequel. Others weren’t sure he and Vaughn could have chemistry as good as Season 1’s stars Matthew McConaughey and Woody Harrelson.

Following months of rumors over who would step into their huge shoes, everyone had an opinion as to who they wanted to star in the eight episode hour-long drama.

Many were upset because HBO and showrunner Nic Pizzolatto hired two more white males. And others were just plain pissed for the hell of it.

“When Nic Pizzolatto writes his autobiography, it should be called ‘How to Get Away with Being a ¯_(ツ)_/¯ White Man,'” tweeted @alex_abads.

As TheWrap previously reported, one of this season’s stars is expected to be female, but thus far no leading lady has been announced. Season 2 will focus on three police officers and a career criminal navigating a web of conspiracy in the aftermath of a murder.

Read all the tweets below.

Maybe in the next season of True Detective, Colin Farrell & Vince Vaughn can solve the mystery of the missing female and non-white actors

I’m seeing True Detective S2 will star Colin Farrell and Vince Vaughan. Imagine having two shots at an open goal, and missing with both.

True Detective literally reinvents itself after a season and STILL the leads are two white men? what a shame.

Fool me once. Shame on you. Fool me twice. Shame on me. Fool me into watching the Colin Farrell version of Miami Vice. Shame on us both. – Mr J in the UK (@mrjintheuk) September 14, 2014

Colin Farrell and Vince Vaughn are officially the new stars of True Detective. Hmm, I don’t know about this. I hope it’s good.