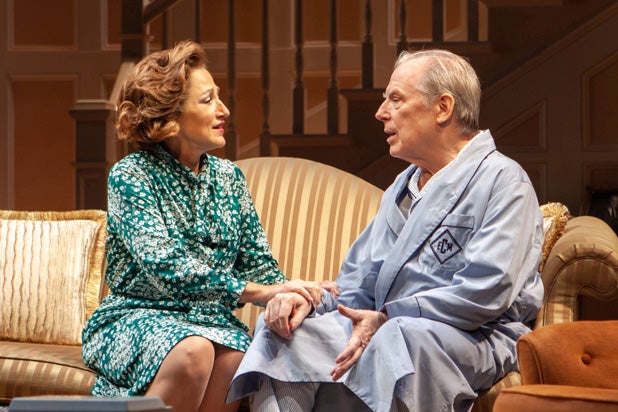 Catherine Sloper embroiders in “The Heiress.” Leslie Crosbie knits in “The Letter.” And Polly Noonan works a Singer sewing machine in “The True,” the new play by Sharr White that opened Thursday in a New Group production at Pershing Square Signature Center.

Polly Noonan is the aide-confidante to Albany’s mayor, Erastus Corning II (Michael McKean), in the year 1977, a time when people used to say that behind every successful man there’s a woman.

The problem is, Polly isn’t Mrs. Corning. Rather, she’s married to the world’s biggest doormat, Peter Noonan (Peter Scolari), who relentlessly puts up with Polly’s political machinations, as well as her clear devotion to the mayor, whom everyone in Albany thinks is sleeping with Polly but isn’t — even though the two of them have wanted to for decades despite never taking their relationship beyond a kiss in an elevator years ago.

Polly is a powerhouse character that is marvelously performed by Falco and written by White. Unfortunately, she often merely marks time in “The True” because 1) the characters around her are such ciphers, and 2) it is 2018 and there are a few major political scandals taking place in real time.

After seeing “The True,” I couldn’t wait to get home to turn on Chris Matthews to watch him pummel Paul Manafort and Brett Kavanaugh. When any hour of MSNBC is more compelling than what’s happening on stage, your play is in trouble.

Polly’s scheme to get Corning re-elected is dramatically limp, and worse, every time a new character is introduced, Polly is stuck giving us decades of background on the guy. Polly doesn’t only mark time as a character; sometimes she has to take several steps backward.

Obviously, White is trying to portray all these men as pushovers whom Polly would eat for breakfast if she were a man. “The True” fairly yells that she should be mayor, it not senator and then president. Instead, she’s working her sewing machine and being an underappreciated foul-mouth dynamo.

Completely unexplored is Polly’s delusion, which the playwright appears to share, that her total lack of diplomacy would be viewed as a positive if she were male. Remember, “The True” is set decades before the uncivil disaster that is our current president.

McKean is almost too effective in conveying white male privilege; he often merges into the beige decor of the mayor’s living room (set design by Derek McLane). Scolari, for his part, finds much humor in being subservient. Scott Elliott directs in way that keeps Falco on stage even when she’s changing her drab costumes (by Clint Ramos).