You’ve heard Hollywood tell the story of the blacklist before, from the cowardly namers of names to the homespun Fascists lashing out against the Communist threat to the victimized artists barred from working on either side of the camera. But while most dramatizations of the dark period of McCarthyism usually focus on the “Are you now or have you ever been?” histrionics on the floor of Congress, “Trumbo” tells a richer and farther-reaching story.

After all, those hearings made for great political theater, but they also led to the blacklist, to years of unemployment and industry banishment — this was an era where “unfriending” really stung — and it’s in telling that part of the tale where this new historical drama offers a different perspective.

Director Jay Roach‘s singular résumé — which includes both the “Austin Powers” series and the HBO film “Game Change” — make him particularly suited to this material. It’s a movie fueled by residual anger over the events of 60 years ago, but it’s also a human story about some of the people caught up in those headline-grabbing events. And since many of those people were clever wordsmiths, we get to see them banter brilliantly, even at their darkest moments.

When we meet Dalton Trumbo (Bryan Cranston), he’s king of Hollywood, writing poetic dialogue for gangsters played by Edward G. Robinson (Michael Stuhlbarg) and signing a contract with MGM that will make him the highest-paid screenwriter in town. But dark clouds are brewing in Washington, D.C., with the World War II alignment with the Soviets turning into a Cold War and Communist sympathizers in many walks of life, including show business, suddenly coming under fire.

The industry — personified by gossip columnist Hedda Hopper (Helen Mirren) and gung-ho chickenhawk John Wayne (David James Elliott) — starts closing ranks against a perceived Red Terror, and lefties like Trumbo and his pals, including Arlen Hird (Louis CK, as a fictional composite character), are finding themselves out of work. 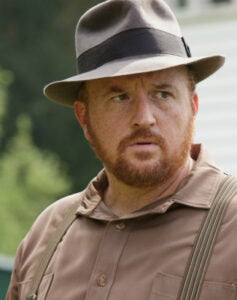 The first half-hour of “Trumbo” treads on familiar ground (Roach mixes black-and-white footage of the film’s characters testifying, or refusing to do so, with the real-life testimonies of Ronald Reagan, Robert Taylor, and others), but the story picks up after Trumbo finishes his stint in prison for contempt of congress. Unable to sell his own scripts, Trumbo gets his friend Ian McLellan Hunter (Alan Tudyk) to put his name on “Roman Holiday.”

Eventually, working with low-budget moguls the King Brothers (John Goodman and Stephen Root), Trumbo assembles Hird, Hunter, and all of their other unemployable friends into a factory of writers, cranking out quick, good scripts for movies that can be made both on the cheap and pseudonymously.

The screenplay (by TV vet John McNamara, adapting Bruce Cook’s biography) offers a Trumbo who’s a hero, but not a saint. As portrayed in the film, he’s committed to his Communist principles but still happy to be well-off and to enjoy the privileges his money brings him. He’s a loving husband (to Cleo, played by Diane Lane) and father, but he misses a lot of birthdays and family moments so that he can be locked in his study (or in the bathtub) writing, writing, writing, fueled by pep pills and booze.

Cranston has consciously adopted Trumbo’s deep, gravelly manner of speech, and that impersonation may be a deal-breaker for some. The first few scenes in the movie had me worrying that I was watching an extended “Saturday Night Live” sketch, but once I got used to the actor’s intonations, it became part of the character and no longer stood out.

“Trumbo” has no shortage of fine performances, from the scene-stealing work of Louis CK (whose arguments with Cranston are among the film’s highlights), Lane (thankfully never reduced to just “the wife” here) and a wonderfully villainous Mirren to the brief but effective appearances of Elle Fanning (as Trumbo’s older daughter) and Adewale Akinnuoye-Agbaje as a no-nonsense fellow inmate of Trumbo’s who lets the writer know he’s not like the saintly black men of the era’s Hollywood movies.

Any evocation of vintage Hollywood runs the risk of coming off like a cinematic wax museum, but the actors playing well-known personalities — Stuhlbarg, Elliott, Dean O’Gorman (as Kirk Douglas), Christian Birkel (as Otto Preminger) — come off as reasonable facsimiles, and the film’s evocation of 1950s Southern California feels authentic and lived-in.

Roach and McNamara fall victim to the occasional phony biopic moment or straight-up moment of didacticism, but overall “Trumbo” is a lively history about the day-in-day-out drudgery of survival during oppressive times. Screenwriters are so rarely taken seriously by the film industry that it’s a nice switch to watch them be the heroes.