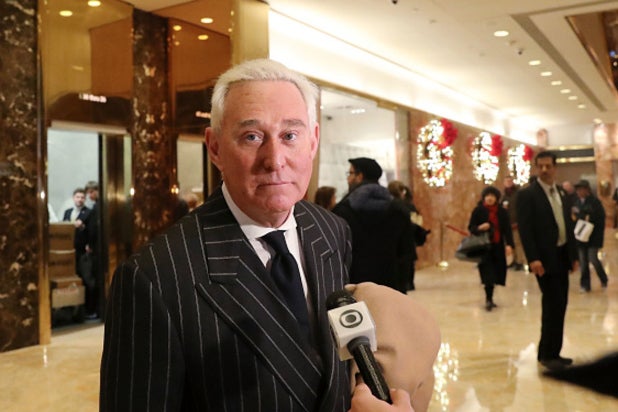 Roger Stone, a longtime adviser to President Donald Trump, tweeted Wednesday that he is “fine” after a “suspicious hit and run” — and questioned whether it may be related to the investigation of possible ties between Russia and Trump’s presidential campaign.

Stone said air bags saved his life when a car he was riding in on the passenger side was T-boned by a “large grey 4 door – dark tinted windshield.” He said he suffered blurred vision in his right eye, for which he had previously undergone surgery for a detached retina sustained in a boxing match.

Stone told Miami’s CBS affiliate that the collision “certainly could be” related to the Russian hacking investigation.

“It happens on the same day the ranking Democrat on the Intelligence Committee calls for me to appear before the committee,” he said.

Stone is one of several associates of President Trump who have been under scrutiny for possible links with Russia during Trump’s campaign. In a statement to The Associated Press, Stone said he’s hired two attorneys to try to get the government to “either charge me or admit they have no case whatsoever.”

Stone has acknowledged contact with “Guccifer 2.0,” a hacker whom U.S. officials believe to be tied to Russia. Stone said he was “unaware at the time of the brief exchange of allegations that the hacker in question is suspected of being a Russian asset,” according to AP.

Stone did not immediately respond to TheWrap’s request for comment on the hit and run, or on who he believed hit him. He said that despite the accident, he insisted on going to a previously scheduled appearance for Alex Jones’ InfoWars at 3 p.m. ET Wednesday.

Stone, a former aide to President Richard Nixon, has been both reviled and celebrated for his way with political trickery in the service of conservative candidates.

A 1986 Washington Post profile detailed how Stone volunteered to work for Nixon’s Committee to Re-Elect the President in 1970, used a fake name to recruit a political spy, and helped sabotage a Nixon rival by impersonating a socialist group to give money to the rival’s campaign. He has also taken credit for helping bring down former New York Gov. Eliot Spitzer in a sex scandal.

More recently, during the Republican presidential race, Sen. Ted Cruz accused Stone of helping plant a National Enquirer story that accused Cruz of having extramarital affairs. Cruz said Stone had “50 years of dirty tricks behind him” and referenced a Nixon-era pejorative — “ratf—er” — used to describe political operatives who use dirty tricks.

“He’s a man for whom a term was coined for copulating with a rodent,” Cruz said at the time. “Well, let me be clear, Mr. Trump may be a rat but I have no desire to copulate with him. And this garbage does not belong in politics.”

I am fine after suspicious hit and run. Blurred vision in right eye on which I had surgery for detached retina sustained in boxing match