When Donald Trump’s campaign gave a “pro-White” radio host a media credential for a Memphis event, the campaign defended itself by saying it provided press passes to everyone who asked.

But TheWrap has learned that that wasn’t true for an African-American newspaper.

“We sent out two email requests,” Karanja Ajanaku, executive editor of The New Tri-State Defender, told TheWrap. “The first email was sent on the Monday before the event, but we never heard back. The second email was sent on Thursday. They never even acknowledged our emails.”

Such was not the case for James Edwards, host of The Political Cesspool, which describes itself as “unapologetically pro-White.” He says he received not just a press pass to Saturday’s event, but also an interview with Trump’s son, Donald Trump, Jr.

“The campaign provided media credentials to everyone that requested access to the event on Saturday in Memphis,” Trump’s campaign said in a statement. “There were close to 200 reporters in attendance and we do not personally vet each individual. The campaign had no knowledge of his personal views and strongly condemns them.”

Asked why the Defender was not credentialed, Trump spokeswoman Hope Hicks told TheWrap, “I am not aware of their request or it not being processed.”

The campaign also said it had no knowledge of Donald Trump, Jr. taking part in an interview with Edwards, and said Trump’s son was not at the Tennessee event.

On his blog, Edwards described how “fortunate” he was to attend the event in Millington, Tenn., on Saturday, and said he was able “to bypass the crowd and long line by parking in a VIP area designated for members of the press.” He also said a “previously taped” interview with Trump Jr. would air this coming Saturday. 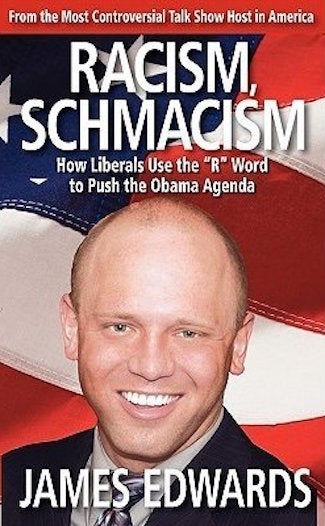 Edwards is the author of the book “Racism, Schmacism” (left). The show’s website says it played an important role when it launched in 2004 because, “Even though Whites represented the vast majority of the American population, we had no mainstream voice.” It boasts of defending “Confederate parks” after “black malcontents” tried to remove them.

The Southern Poverty Law Center has called “Political Cesspool” racist and anti-Semitic, saying it “has featured a wide roster of white supremacists, anti-Semites and other extremists, such as the longtime Klan leader David Duke and Holocaust denier Willis Carto.”

The group’s website said Edwards’ reaction was “absolute elation!” when he learned he had been added to the SPLC’s list of hate groups.

The Tri-State Defender, meanwhile, describes itself as “a weekly newspaper and daily online news resource published in Memphis, Tennessee, serving the African-American communities in Memphis and nearby areas of Arkansas, Mississippi and Tennessee.”

Although it is little-known outside of the Memphis area (and declined to share circulation figures with TheWrap), it has covered other presidential candidates with no problems.

“We covered Hillary when she was here, we covered Bill Clinton and Ben Carson,” Ajanaku said. “Those were important news makers at our community. As the GOP frontrunner we would have liked to be in a position to hear what he had to say.”

Trump’s campaign has been accused before of inadequately distancing itself from white racists. After former Ku Klux Klan leader David Duke endorsed him, Trump declined to quickly disavow Duke in a CNN interview, and later blamed a “very bad earpiece.”

House Speaker Paul Ryan, among others, called on him to unequivocally disavow Duke. Trump defended himself by saying he has repeatedly done so.