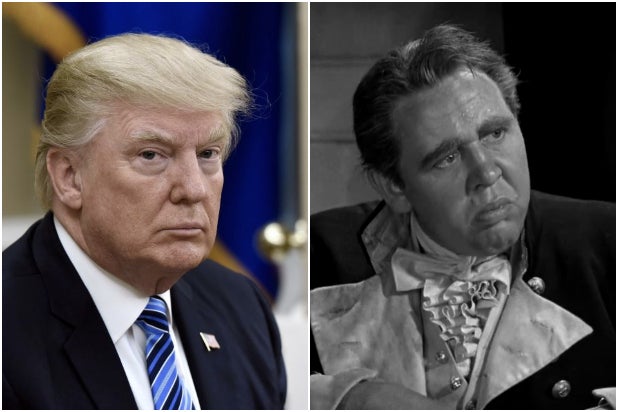 In a bizarre tweet Tuesday that is perplexing classic film fans, President Trump compared himself and his coronavirus response efforts to the film “Mutiny On the Bounty” — only he aligned himself with the film’s ruthless villain, Captain Bligh.

“Mutiny On The Bounty” is a story about a tyrannical sea captain whose crew leads a mutiny and casts him and his loyalists off their ship, and the tweet came as a warning to Democratic governors who said they would go over the President’s head in reopening the country from the coronavirus after he said Monday he had “total authority” to do so.

“Tell the Democrat Governors that ‘Mutiny On The Bounty’ was one of my all time favorite movies,” Trump said Tuesday in a tweet. “A good old fashioned mutiny every now and then is an exciting and invigorating thing to watch, especially when the mutineers need so much from the Captain. Too easy!”

Also Read: Trump Apparently Thought a 'Curb Your Enthusiasm' Insult Was a Compliment and People on Twitter Are Amused

The problem is, Captain Bligh is one of the all time great movie villains and has become associated with his sadistic treatment of his crew. In fact, the AFI ranked Captain Bligh as the No. 19 movie villain of all time, just behind the shark from “Jaws” and ahead of “Man” from “Bambi,” or the guy who shoots and kills Bambi’s mom in the film.

It’s hard to know which version of “Mutiny On the Bounty” is Trump’s favorite. Could it be the Best Picture-winning, 1935 film starring Charles Laughton as Bligh alongside Clark Gable as his first mate who leads the mutiny? There’s also the 1962 version starring Marlon Brando with Trevor Howard as Bligh, which was nominated for seven Oscars. And Anthony Hopkins and Mel Gibson even starred in a version called “The Bounty” from 1984. Whichever version we’re talking about, they’re all the bad guy.

Though this wouldn’t be the first time Trump decided to model himself off a movie bad guy. Check out Trump’s tweet below as well as some of the astonished reaction to the tweet:

Tell the Democrat Governors that “Mutiny On The Bounty” was one of my all time favorite movies. A good old fashioned mutiny every now and then is an exciting and invigorating thing to watch, especially when the mutineers need so much from the Captain. Too easy!

Captain Bligh was the villain.

The job of a leader is to support and inspire, not to tyrannize and punish. Leaders foresee and prevent problems before they emerge, listen to experts, and keep people safe.

America could use some inspiration and support right now. pic.twitter.com/vdikcBAwxv

Who can forget the finale where Fletcher Christian and the other mutineers have a "great talk" with Captain Bligh and tell him he's doing "a great job, the best, really the best job" and say Bligh should have "total authority" https://t.co/TaAhtPrfdd

Mutiny on the Bounty was about the ruthless, unjust, tyrannical Captain Bligh of the HMS Bounty who shackled his own crew and tortured so many of his own men that they mutinied against him. It’s fascinating that Trump sees himself as Captain Bligh. It’s quite terrifying as well.

On The Office we had as backstory that Dwight Schrute identified with Billy Zane’s character in Titanic. We could never have written anything as funny as him identifying with Captain Bligh in Mutiny in the Bounty. https://t.co/9e8rl7FLTY