Former president Donald Trump copped on Sunday to his long-held strategy for polling and headlines: “If it’s bad, I just say it’s fake!”

“By the way, you have a poll coming out. Unfortunately, I want to know what it is. You know they do that straw poll, right? If it’s bad, I just say it’s fake. If it’s good, I say, ‘That’s the most accurate poll, perhaps, ever,'” he told the audience at the Conservative Political Action Conference. 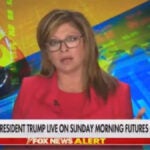 “Fake” has long been Trump’s go-to description of news outlets, headlines and polling he doesn’t like. Recent statements from the one-term president — sent by email since he has been banned from the major social media networks for half a year, for which he is now suing Twitter, Facebook and Google — include references to “the fake Russia Russia Russia hoax,” a “fake interview” on CNN and “the fake news media.”

During Sunday’s CPAC speech, Trump also touched on “caravans” of immigrants, warning his fans to “get ready” for their arrival in America, and referred again to the 2020 election, saying he “won anyway.” He lost to President Joe Biden and dozens of cases brought to court contesting the results have been dismissed.