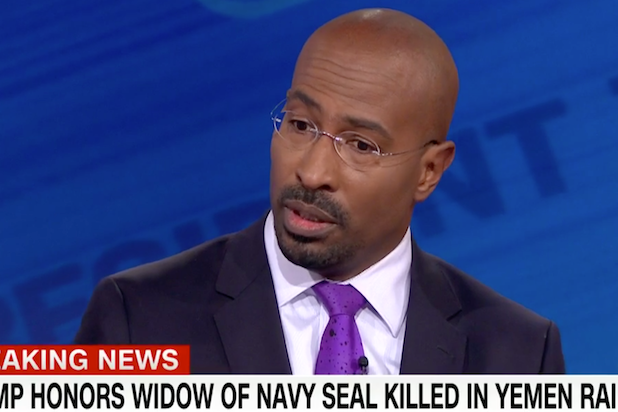 Van Jones, the CNN political commentator and outspoken critic of President Trump, has come around to admiring POTUS. Asked by Anderson Cooper for his reaction to the standing ovation for the widow of a Navy Seal killed in action during Tuesday’s address to Congress, Jones said: “He Became President of the United States in that moment, period.”

Jones said he “did something extraordinary, and that people who wanted Trump to remain a “divisive cartoon” should be worried after the speech.

“There are a lot of people who have a lot of reasons to be frustrated with him, to be fearful of him, to be mad — but that was one of the most extraordinary moments you have ever seen in American politics,” Jones said of Trump honoring Carryn Owens, whose husband Chief Petty Officer William “Ryan” Owens was killed in a recent Yemen raid.

"He became President of the United States in that moment, period" @VanJones68 on @POTUS honoring Navy Seal widow https://t.co/uZtnj0OLgs

Jones has emerged as one of the leading voices calling out Trump’s contradictions and conflicts in the post-election media landscape. His comments on election night, describing the result as a “white-lash” caused a sensation.

Jones also predicted “a horrendous abuse of power” by Trump

“I think Trump is much worse than people understand,” Jones said last month. “I think we’re on the verge of a kleptocracy.”

However, Jones changed his tune on Tuesday, prompting Republican Senate Majority Leader Mitch McConnell to tell Anderson Cooper, “I find myself in agreement with Van Jones, for the first time in my political life.”