A British documentary filmmaker who chronicled the final six weeks of the Donald Trump presidency said he will cooperate with a subpoena from the House committee investigating the Jan. 6 attack on the Capitol and will turn over his footage of Trump and staff members.

Alex Holder of AJH Films is complying with the congressional subpoena, providing exclusive video of Trump at the White House. Holder’s film is set for summer release in a three-part documentary called “Unprecedented.”

“When we began this project in September 2020, we could have never predicted that our work would one day be subpoenaed by Congress,” Holder said on his Twitter feed. 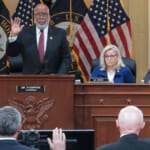 “As a British filmmaker, I had no agenda coming into this,” Holder wrote. “We simply wanted to better
understand who the Trumps were and what motivated them to hold onto power so desperately,” he said. “We have dutifully handed over all the materials the Committee has asked for and we are fully cooperating.”

Holder is expected to appear before the Jan. 6 committee on Thursday.