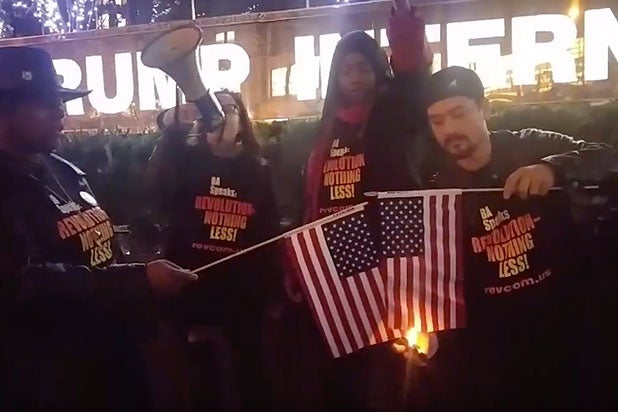 According to Fox News Insider, members of the far-left NYC Revolution Club poured accelerant on a pair of American flags and lit them on fire.

Just burned US flag at Trump Hotel NYC. We REFUSE to Accept a Fascist America! Now your turn: #FlagBurningChallenge pic.twitter.com/pvMDaVIyKD

"Oops!" We did it again
Reject a Fascist America#FlagBurningChallenge#1stAmendment#NotMyPresident#NoDAPL#RevCom pic.twitter.com/YqxY69xNIO

And here it is from earlier this evening. Thanks @SunsaraTaylor
Fuck you @realDonaldTrump
Who's next for the #FlagBurningChallenge ? https://t.co/jgPgp8Aj0E

Earlier in the day, Trump fired off a tweet stating people who burn the American flag should face jail time or even a loss of citizenship, despite protection of the practice under the First Amendment. The tweet was presumably a response to Hampshire College students burning flags in protest of presidential election results.

Nobody should be allowed to burn the American flag – if they do, there must be consequences – perhaps loss of citizenship or year in jail!

“Flag burning is completely ridiculous and I think you know that. I think the vast majority of Americans would agree,” Miller said before CNN’s Chris Cuomo chimed in, “But legal.”

According a New York Times article from 2005, Clinton co-sponsored a bill to “criminalize the burning of the American flag. Her supporters would characterize this as an attempt to find a middle way between those who believe that flag-burning is constitutionally protected free speech and those who want to ban it, even if it takes a constitutional amendment.”