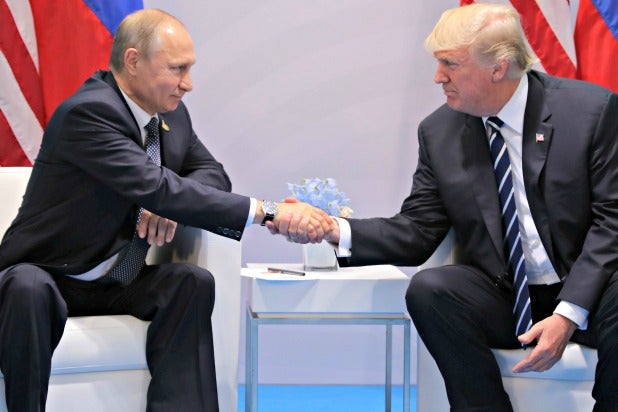 President Trump’s foreign-policy advisers wanted to be crystal-clear that he should not congratulate Russian President Vladimir Putin on winning yet another election under questionable circumstances. And so, The Washington Post reported Tuesday, they threw subtlety to the wind and wrote on Trump’s briefing materials, in all caps: DO NOT CONGRATULATE.

You can guess what happened next, right?

“I had a call with President Putin and congratulated him on the victory, his electoral victory,” Trump said Tuesday.

Why shouldn’t Trump have congratulated Putin on his victory Sunday? Sen. John McCain spelled out a few of the reasons on Twitter, a few hours before the Post reported on the DO NOT CONGRATULATE memo.

“An American president does not lead the Free World by congratulating dictators on winning sham elections. And by doing so with Vladimir Putin, President Trump insulted every Russian citizen who was denied the right to vote in a free and fair election,” McCain wrote.

McCain was referring to the fact that many Putin critics considered the election a foregone conclusion: As the BBC noted, Putin has led Russia since 1999, and the main opposition leader was barred from the race. Putin got more than 76 percent of the vote.

Trump similarly ignored aides’ request that Trump ask Putin about a nerve-agent poisoning in the UK that the U.S. has blamed on Russia, the Post said.

Trump’s interactions with Russia are under a microscope because of evidence that Russian operators conspired to help him in the 2016 election. Even before DO NOT CONGRATULATE jokes swept Twitter on Tuesday night, some, including Foreign Policy, pointed out that Obama also congratulated Putin, when Putin won in 2012.

Eurasia Group President Ian Bremmer said that Trump was one of many world leaders to call Putin and congratulate him.

“Not actually news,” he tweeted. “France President Macron, Israel PM Netanyahu and Japan PM Abe all beat him to it.”

Maybe their advisors didn’t use all caps?

Memo to Trump’s team: NEXT TIME TRY A LARGER FONT OR ITALICS.