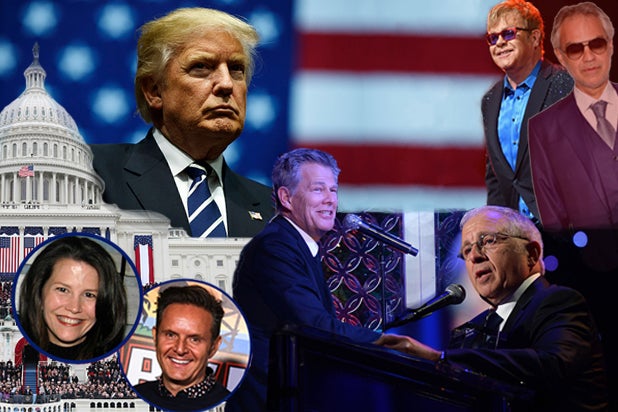 Donald Trump is so displeased with his team’s inability to lock in A-list talent for his inauguration events next month that he’s ordered a “Hail Mary” shakeup of his recruiters to try to book performers, a person familiar with the situation told TheWrap.

Mark Burnett, who produces “Celebrity Apprentice” with Trump and has been overseeing entertainment for inauguration festivities, has brought in talent recruiter Suzanne Bender, a former “Dancing With the Stars” and “American Idol” booker, to end an effective freeze-out by Hollywood, the insider said.

Bender also worked on Burnett’s “StarMaker,” a short-lived singing competition hosted by P. Diddy that aired on MTV in 2009.

“Trump is very unhappy,” the insider said. “Bender has been tasked with salvaging this… It’s a Hail Mary.”

“It’s coming directly from the principal,” he said, referring to the president-elect. He also scoffed at a recent TMZ report claiming that Trump is “hardly engaged in the party planning at all.”

Bender could not be reached for comment. Burnett’s publicist did not respond to two email requests for comment. His office referred a reporter to the publicist.

Trump’s team denied having any issues booking talent. “First class entertainers are eager to participate in the inaugural events,” Boris Epshteyn, communications director for the Presidential Inaugural Committee told TheWrap in an email. “The inauguration as a whole will be an exciting and uniting celebration of freedom and democracy. We will be releasing further details at the appropriate time.”

The Trump transition has been struggling for weeks to secure A-list talent for the inauguration celebration. The only person confirmed to perform at the event is Jackie Evancho, a 16-year-old former “America’s Got Talent” contestant. She is set to sing the national anthem before he takes the oath of office

Performers who are known to have rejected requests include Elton John, country singer Garth Brooks and opera star Andrea Bocelli. According to the insider, many of those approached have said they do not want to “normalize” Trump’s presidency.

A knowledgeable individual said Bocelli met with the president-elect and agreed to perform, but then bowed out under pressure from fans. The individual also said longtime Trump friend and Vegas hotelier Steve Wynn had promised to deliver Celine Dion, but could not do so.

Wynn also failed to book Brooks, whom he signed in 2009 for a reported multi-million dollar four-year residency at one of his Las Vegas properties.

TheWrap has also learned that composer and producer David Foster and powerhouse music manager Irving Azoff have also tried to wrangle top talent for the event — even though Foster issued a public denial last week that he was involved.

Two Hollywood insiders, who asked not to be named, said they were told directly by an international music superstar that both Azoff and Foster had called him several times in the last month to try to persuade him to perform at the January 20 festivities.

The singer, a longtime liberal, demurred, saying there was no way he would agree to the gig.

Reached by phone, Azoff declined to comment and referred questions to his publicist. His publicist did not return calls or an email. Foster’s publicist denied that he was involved in the inauguration planning.

As TheWrap previously reported, two veteran Hollywood bookers said that Trump’s team had reached out to them and dangled the possibility of ambassadorships and appointments to government commissions if they could deliver marquee names.

Last month, a representative for Elton John issued a statement denying that his client had agreed to perform at the inauguration after a member of Trump’s transition team said the “Rocket Man” singer would take the stage. “Incorrect. He will NOT be performing,” the publicist wrote, using all-caps for good measure.

According to the D.C. insider, Trump has been underwhelmed with the team’s efforts. He said Azoff’s role has been diminished as a result.

Also Read: Eric McCormack Would Perform at Trump's Inauguration in Exchange for 'a Lobotomy'

“Woke up this morning to a lot of news,” Foster wrote. “For the record, I was asked to participate in the upcoming inauguration some time ago and I politely and respectfully declined. Any news outlet that is reporting otherwise is misinformed.”

But the insider said Foster had in fact helped try to wrangle some of his Hollywood friends.

The New York Post’s Page Six reported Saturday that Foster, whose credits include the Celine Dion hit “The Power of Love,” had approached Bocelli — with whom he had starred in the 2009 PBS special “Andrea Bocelli & David Foster: My Christmas.”

The Hollywood insider, a talent booker, said Foster backed out amid intense backlash from his Hollywood friends.

“If anyone does do it, I hope that the check that they get is in the nine figures. Because it’s probably the last check they’re ever going to get,” Dixie Chicks manager Simon Renshaw told TheWrap on Friday.

The Washington insider said Burnett will have his work cut out for him.

“This is now Mark Burnett’s show,” he said.