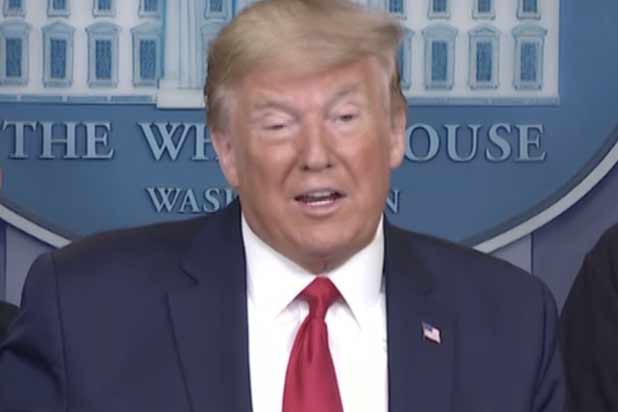 During Monday’s press briefing on his administration’s handling of the ongoing coronavirus crisis, President Donald Trump lashed out at a Fox News reporter Kristin Fisher after she pressed him about the timeline of testing results.

“Testing is still a big issue in this country,” Fisher said. “When can hospitals expect to receive a quick turnaround of these test results?”

Trump then went into a long, rambling response where he shifted responsibility to the states and said he should be praised instead of being asked such a “horrid” question by her.

Trump didn’t stop his lecture there, but eventually concluded, “You should say, ‘Congratulations. Great job,’ instead of being so horrid in the way you ask a question.”

The moment caught the attention of CNN’s fact-checker, Daniel Dale, who corrected the president via Twitter: “Trump calls a reporter ‘horrid’ for asking a question about testing. He then falsely claims, as he did three times last week, that the initial tests were old and obsolete. That is completely nonsensical. They were developed in 2020. This is a new virus.”

It also caught the attention of singer Bette Midler, who fumed, “Today Trump called a reporter ‘horrid’ for asking about coronavirus tests. I’m not sure if he realized she works for his favorite @FoxNews, but maybe when they report on the incident he’ll finally find out he’s an asshole!”

Fisher has been taking this topic pretty seriously, given her father is an emergency room doctor in his seventies who has pre-existing conditions. He’s a former NASA astronaut who’s been working 24-hour ER shifts but told her in an interview last week he’s more worried about working during this crisis than when he first went to space.

Trump tells female reporter: "You should say congratulations, great job instead of being so horrid in the way you ask a question. " pic.twitter.com/ozWqKyFMNr