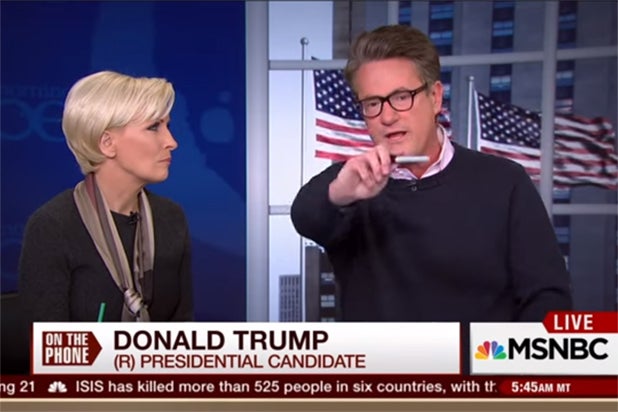 Not only did he say some mean things about Mika Brzezinski’s face, the leader of the free world also called her and fiancee Joe Scarborough’s morning show “poorly rated”:

While clearly there are multiple problems with these tweets, for the sake of this particular post, we’ll ignore the stupid remark about Brzezinski’s appearance and instead simply fact-check Trump’s take on “Morning Joe’s” Nielsen numbers. We hope you’re sitting down for this: the POTUS is not quite correct.

Those numbers mean the 6 a.m. to 9 a.m. show is up 50 percent from the prior year in terms of its overall audience members, and +38 percent in the main demo. That 50 percent hike is actually the largest growth in total viewers across all of cable news. And before rightwing commenters start in on how the number is skewed by a low starting point, “Morning Joe” was already handily beating CNN’s “New Day” before Trump even became the GOP nominee, let also the President.

Any readers particularly good at math may have deduced by now that “New Day” has overtaken “Morning Joe” to become runner-up in the main demo each morning. That would have been a fair criticism, Mr. President. For a guy who hates “fake news,” there was a real fact to focus on — you know, as opposed to tossing around cheap plastic surgery shots and a generic measurement insult.

Either way, Fox News Channel’s conservative-leaning “Fox & Friends” is still handily beating both of its competition’s morning shows — two lefty options that almost surely split liberal viewership. Cable news’ top morning talker has hauled in 1.622 million total viewers on a per-episode basis from Christmas 2016 through the current point of June 2017, with 372,000 of them falling in the all-important age range.

We’ll point out here that one of those 1.622 million resides in the White House, though No. 45 is way passed the demo’s 54-year-old cutoff.

Versus last year, the mighty “Fox & Friends” has soared 44 percent overall and 52 percent in the key demo. In summation, Donnie, you’ve been good for everyone’s ratings — and yes, that includes “Morning Joe.” Whoops.