Twitter suspended an account for sharing comments former president Donald Trump made on his new website this week, begging the question of whether journalists or fans who share his comments also run the risk of losing their accounts.

Here at TheWrap, questions get answers: No, journalists won’t catch a Twitter ban for tweeting the statements of a former president, a company spokesperson confirmed.

Earlier Thursday, a Twitter rep explained the @DJTDesk ban, telling TheWrap, “As stated in our ban evasion policy, we’ll take enforcement action on accounts whose apparent intent is to replace or promote content affiliated with a suspended account.” 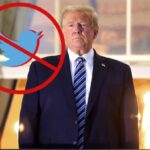 Twitter’s “ban evasion policy” prohibits a “range of behaviors,” as the company puts it, including accounts that “imitate a suspended account.” Accounts are also barred for allowing “someone who has been permanently suspended from Twitter to permanently take over or temporarily operate” their Twitter handles. (The @DJTDesk account was not affiliated with anyone on Team Trump, a Trump-tied source told The New York Post on Thursday.)

The problem for political reporters and commentators is, though, that though Trump was kicked off the platform in January after the deadly riot of his supporters at the Capitol, his team has continued to send out plenty of his statements to their press lists. Sometimes, the statements still include Twitter-specific phrases or characters, like “@” symbols. The statements are often brief and, well, tweet-like, and since they come from a former president, a journalist might be inclined to share them online.

Pressed for clarification on Thursday’s statement on the @DJTDesk ban, a Twitter spokesperson said, “[T]his is aimed at accounts that have the sole intent of resharing these posts.”

So, media folk and unverified masses alike, as long as you’re interspersing tweets about other topics, you aren’t facing suspension for relaying messages from the 45th president. There is a rich tradition of journalists complaining about restaurants on Twitter. Try that.