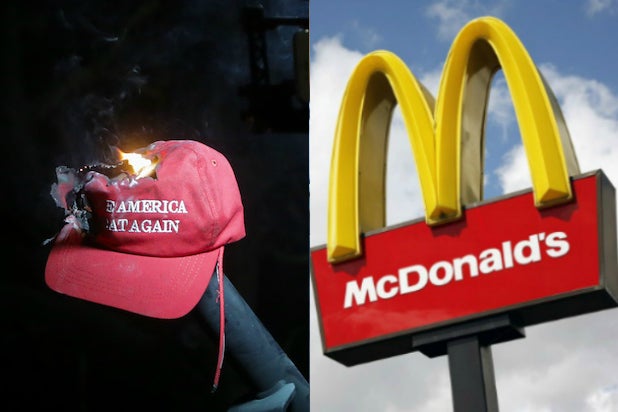 Trump supporters are furious over an anti-POTUS tweet from McDonald’s that went viral on Thursday morning. It called the president “a disgusting excuse of a President.”

Even after the fast food company issued a statement, saying its @McDonaldsCorp account was compromised, Trump fans weren’t satisfied and called for a boycott of the restaurant chain.

It comes just one day after hundreds of other Twitter accounts were hacked, according to CNBC, including those of pop star Justin Bieber and media outlet Forbes. Despite evidence that McDonald’s was hacked, fans have taken to Twitter to express outrage, as one user here predicted:

Also Read: McDonald's Tweets Trump Is a 'Disgusting Excuse of a President,' Claims Account Was Compromised

Here is a sampling of the online vitriol:

@McDonaldsCorp @McDonalds Adding you to the Boycott List. Fire Gibbs. This was an intentional act. Disgraceful. #mcd

Retweet and Boycott McDonalds – Can you believe this insanity?https://t.co/5WQ73VoacC pic.twitter.com/WDeobK2H78

Hey, @McDonalds. Care to elaborate on how much you LOVE TO HATE AMERICANS? Should we #Boycott #FakeFood ?? pic.twitter.com/RjsrrbQ926

screw mcdonalds…..i can boycott them too

Also Read: How Trump Thinks He Won the Election: 'I Wouldn't Be Here If It Wasn't For Twitter' (Video)

This @McDonaldsCorp boycott will be an easy one for me, can't think of the last time I actually had McDonalds… ????

Very conflicted re the #McDonalds "hack." I want to boycott but love double cheeseburgers. If you had a 24hr menu, you'd never lose me.

Looks like it's time for me to boycott McDonalds. Anyone that knows me should short the stock on my lost sales alone. https://t.co/5jtUun4PXo

Still, others have taken to Twitter to poke fun at the situation:

As if Trump supports are going to boycott the main source of their diet. ???? #McDonalds