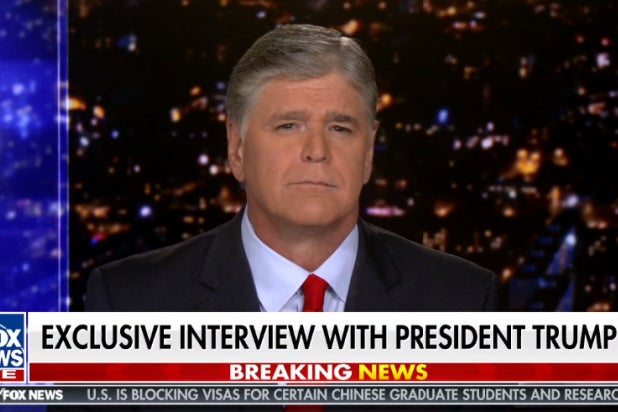 Donald Trump did a half-hour phone interview with Sean Hannity on Hannity’s Fox News show Wednesday night, and Trump made one particularly interesting comment about the folks who run the polls at Fox News. Specifically, he called them “terrible” and “among the worst” political pollsters out there.

Trump’s comment about the polls came as part of a non sequitur when he was answering a question from Hannity about Democratic governors and mayors who are opposed to Trump’s attempts to have federal officers violently shut down peaceful protests against racist police violence in American cities.

You can watch the clip here.

After Trump blasts Fox News’ polling firm, saying it’s “among the worst pollsters of all,” Hannity doesn’t defend his network or colleagues.

Instead, he names some conservative pollsters he does like, such as Matt Towery, Scott Rasmussen, and John McLaughlin. pic.twitter.com/9M8DKtq4Vn

It’s hard to guess what polls Trump is referring to when he says he’s leading in those states, but he’s not leading in any major poll in Wisconsin, Pennsylvania, or New Hampshire. And if you aggregate the major polls, he’s trailing in every single state he mentioned except Ohio.

Also Read: Tucker Carlson Is Mad About CNN's Michael Cohen Interview Before It Even Happens (Video)

Per 538, on aggregate Biden is ahead by five points in Pennsylvania, three points in Florida, eight points in New Hampshire, two points in North Carolina and seven points in Wisconsin. He’s got a one-point lead in Ohio.

Anyway, this is where Trump decided to start talking trash about Fox News while live on the air on Fox News.

“I must tell you that Fox has among the worst pollsters of all. I think they’re terrible,” Trump whined.

“I don’t know who at Fox is doing it, but they’re terrible pollsters, and they have been frankly even four years ago. That’s probably the same group. But they don’t have a clue, your pollsters.”

Hannity, for his part, was apparently not inclined to defend the network that turned him into a household name, opting instead to say some nice things about conservative pollsters that Trump already likes that do not work for Fox News.

“I actually like Matt Towery, he’s separate and apart, for the Fox O & Os,” Hannity said, referring to local news stations that are Fox affiliates.

“I’ve known him since Newt Ginrich’s Contract With America days. I’m fond of him and John McLaughlin and Scott Rasmussen.”

McLaughlin is an interesting name to float here, because he’s probably best known for being wrong.