Former president Donald Trump said this week that Twitter was a “failed operation” before he joined over a decade ago and Facebook Founder Mark Zuckerberg used to “kiss [his] a–.” He has been banned from both platforms since January.

In an interview with Fox News’ Greg Gutfeld that has been rolling out over the week, Trump said, “Well, you know, a lot of people think Twitter was bad for me. I disagree. I think it was good for me. Twitter has become a very boring place. I don’t wanna be, like, bragging or anything, but people are saying it’s become very boring.” 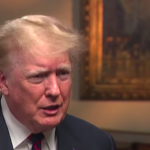 In the interview, he again plugged the class action lawsuit he announced against Twitter, Facebook and Google, in which he accuses the major tech companies of illegally silencing him. Gutfeld said Trump “made the site.”

“You know, when I went onto Twitter like 12 years ago, Twitter was a failed operation and it became successful and a lot of people said I had a lot to do with it,” he mused before moving to discuss Zuckerberg, whom he said he more-or-less blew off on the White House visits.

During the portion of the interview that aired Wednesday, he advised Gutfeld to let his unvaccinated wife do whatever she wanted to do.