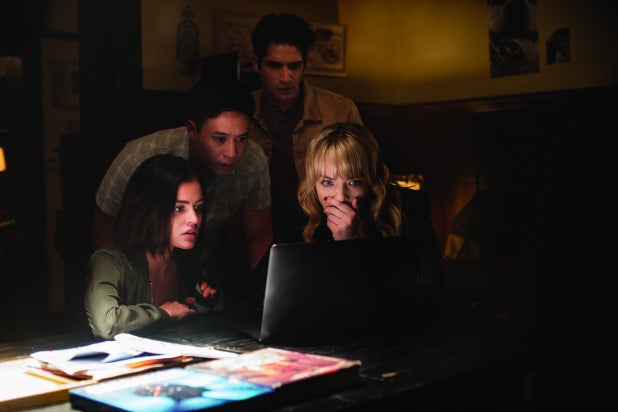 The title of this horror movie on-screen is officially “Blumhouse’s Truth or Dare,” maybe to differentiate it from, say, “Madonna: Truth or Dare” or some other film based around this game, which may still be popular among more repressed high school and college students. Anyone who played truth or dare as a teenager will know that it usually ends badly, but not quite as badly or ludicrously as it does here.

The concept in this horror movie “Truth or Dare” is that the game itself is somehow possessed by a demon, and this means that, whenever a participant is possessed by said demon, they are forced to make the face that Karen Black makes at the end of the cult TV movie “Trilogy of Terror.” Black pulled that face just once at the end of the Zuni doll segment, but the unfortunate cast of “Truth or Dare” is forced to make it continually throughout the film, often with laughable results, even when it is accompanied (as it sometimes is) by red demon eyes.

“Truth or Dare” begins with a battered-looking woman who grimaces into that Karen Black mug before lighting another woman on fire. We then meet the main characters of the film, young people who are all going down to Mexico for spring break. Director Jeff Wadlow (“Kick-Ass 2”) indulges in some split-screen effects under the credits to show us their progress and their drunken, obnoxious spring break revels. If the intention was to make us hate them and want to see them suffer, mission accomplished.

Olivia (Lucy Hale) is a petite brunette moralist, and her best friend Markie (Violett Beane, “The Flash”) is a blonde who is in mourning for her father, who recently committed suicide. Penelope (Sophia Ali, “Grey’s Anatomy”) has a drinking problem, and her boyfriend Tyson (Nolan Gerard Funk, “The Canyons”) is a medical student who sells prescriptions of Adderall and other drugs to fellow students. Lucas (Tyler Posey) is Markie’s boyfriend, and Brad (Hayden Szeto, “The Edge of Seventeen”) is a gay guy who is closeted to his family. Rounding out the cast is Ronnie (Sam Lerner, “The Goldbergs”), who acts aggressive to compensate for his feelings of inadequacy.

All of them are roped into playing a game of truth or dare by Carter (Landon Liboiron, “Frontier”), and the results are as expected, at first. Ronnie is made to give Tyson a lap dance, and Brad admits that he wouldn’t mind making out with Carter, but “Truth or Dare” is squeamish when it comes to sex or nudity. When Lucas is made to get naked, he runs around in the dark in such a way that we barely see any of his body.

The editing here by Sean Albertson (“Warrior”) is expert and fast and helps to move this enterprise along, but it can be a little abrupt, as when Brad moves in to kiss a guy during spring break, and the camera cuts away as soon as it can. (Does this count as some kind of progress in depicting a same-sex kiss of any kind in a studio movie?)

There is a very suspenseful and well-shot sequence where Penelope is walking along the edge of a roof of a house while drinking, and Olivia and her friends have to try to save her, but Wadlow falters whenever he has to rely on Google searches and Facebook clicking to give us plot exposition. You can’t avoid texting and online searching in movies now because that’s the way we live our lives, but no one has been able to make this cinematically exciting yet, unfortunately.

Also Read: Kevin Bacon, David Koepp to Team Up for Blumhouse's 'You Should Have Left'

The premise of “Truth or Dare” is needlessly convoluted, and it is overloaded with information and side characters. By the time Olivia is driving down to Mexico to meet a deus ex machina nun named Sister Inez (Vera Taylor) to solve the mystery of why they have been possessed by this game, “Truth or Dare” has entered pretty absurd territory.