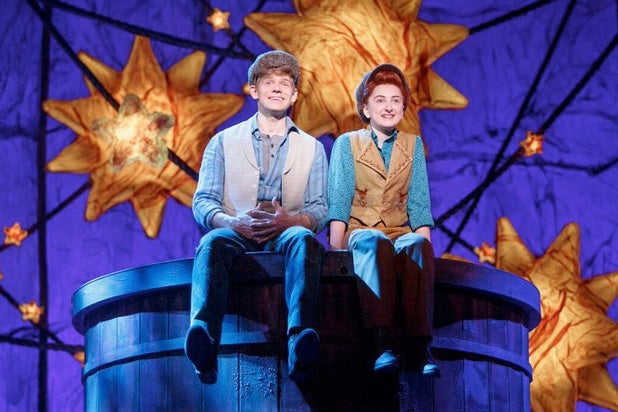 Imagine a vampire story where the undead are really nice people and would never think to bite anyone. That pretty much sums up the suspense and excitement delivered by the new musical “Tuck Everlasting,” which opened Tuesday at Broadway’s Broadhurst Theatre.

If immortality is so awful here on earth, why do people pray for it before they die? Neither the musical nor its source material, Natalie Babbitt’s much-lauded children’s book, asks that question. The show’s first act, as written by Claudia Shear and Tim Federle, finds it necessary to ask all sorts of other less interesting questions.

Long ago, a family of four hiked through a forest and drank some spring water that gave them eternal life. So why has no one else in the nearby village discovered this spring? If the villagers are so terrible to the family, why don’t these lovely undead people just move to another forest? And why have the two sons been separated for 10 years?

Shear and Federle answer most (but not all) of the above questions about the Tuck family, but it takes them forever. More than anything else in “Tuck Everlasting,” their lax narrative gives us a real glimpse of just how long forever can be.

The songs by Chris Miller and Nathan Tysen also give a nod to eternity. No tune seems to have a beginning, a middle and an end. Babbitt’s “Tuck Everlasting” was adapted into a 2002 Disney movie, which rubbed off somehow on this musical: John Clancy’s orchestrations feature that perky, upbeat syncopation that infects every House of Mouse movie musical. Do children really have so little taste in music?

At its heart, “Tuck Everlasting” is very adult. One of the Tuck sons (Andrew Keenan-Bolger) looks 17 but is actually 102, which poses a problem when he finds himself falling in love with an 11-year-old girl (Sarah Charles Lewis) from the nearby village. She wants to drink the magic water now. He tells her to wait six years and drink when she’s 17. OK, but then won’t he be 108? And won’t she still be a tad young for him? It’s another question the show doesn’t answer, along with what are the statutory rape laws in foreverland?

Casey Nicholaw directs and choreographs. It’s nice to report that, after “Aladdin” and “Something Rotten,” he has moved on from send-ups of classic musicals. “Tuck Everlasting,” however, is more whimsical than it is broad slapstick, and Nicholaw is better with the latter. As a result, the performances in “Tuck” come off as merely Broadway generic.

Nicholaw features a long ballet in the second act. It’s very Agnes de Mille or Jerome Robbins. Except, when those two legends choreographed, they usually made the ballet a fantasy or a dream, and they never reserved it for the finale.

Nicholaw uses his ballet to show the 11-year-old girl growing up, getting married, having a baby, playing with kids, never hating or fighting with anyone, and watching everyone around her die. It’s all too much, too late.