Tucker Carlson admitted he was wrong about the Russian invasion of Ukraine during Thursday night’s “Tucker Carlson Tonight,” but the host still found a way to put the blame for the situation in Eastern Europe on the Biden Administration. Specifically, the Fox News host asserted that he never took the situation seriously because President Joe Biden sent Vice President Kamala Harris to Europe as the world feared imminent war.

Carlson opened his show by addressing breaking news of a fire at the Zaporizhzhia nuclear power plant, the largest in Europe, which broke out Thursday after Russian shelling.

“So, the situation appears to be more chaotic by the day, possibly even spinning out of control,” Carlson said in response. “And that, we must be honest, is shocking to us. We’ve been taken by surprise by the whole thing. We’re not the only ones who were, but we’re willing to admit it. The only thing more embarrassing than being wrong in your estimates is pretending that you weren’t. So why didn’t we see this coming, this total loss of control?”

After backpedaling on his Russia-Ukraine conflict stance, he pivoted the blame to Democrats, going on to say that his failure to take the situation seriously was due to Harris’ attendance at the Munich Security Conference in February. 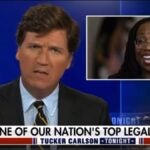 “Well, because we assumed that if things were dire, serious people would be involved in fixing them. But we looked up and we saw Kamala Harris involved, and that reassured us,” Carlson said. “Harris had just come back from Europe where she’d been conducting quote, ‘diplomacy’ with our allies, and that appeared to be proof this could not really be a big deal.”

“If the situation in Ukraine had been legitimately serious, if the future of Europe and the world hung in the balance as now so obviously it does, of course the Biden administration would not have sent Kamala Harris to fix it, because that’s not her job,” he continued. “Kamala Harris’ job is to trot down to the Blue Room periodically to greet delegations of TikTok influencers or to cut occasional PSAs for Children’s Dental Health Awareness Month, which is in February, so we assumed she’d be working on that right now.

“This is just not a serious person, not surrounded by serious people,” he followed. 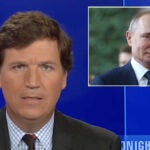 After months of pro-Kremlin comments, Carlson received widespread criticism for his remarks downplaying the Russia-Ukraine conflict last week, even as Russia launched the invasion. He minimized the conflict as a mere “border dispute” and questioned what he described as a sense of “a patriotic duty to hate Vladimir Putin.”

“It may be worth asking yourself, since it is getting pretty serious, what is this really about? Why do I hate Putin so much?” he said on his Feb. 22 show. “Has Putin ever called me a racist? Has he threatened to get me fired for disagreeing with him?”

“But Joe Biden likes Ukraine, so Putin bad, war good,” he added at the time.

Carlson concluded Thursday’s bizarre rant against Harris with a bit about her dating history, referencing her past relationship with Montel Williams — not his first time fixating on the relationship.

“So if you’re looking for someone to date Montel Williams, well, maybe she’s the person you would choose,” he said. “She could be a solid choice, she’s done it before. Dating Montel Williams – you know – is something that’s within her range of experience. Is she good at it? We can’t say. But she’s done it. But this new gig? De-escalating a world-ending conflict with the nuclear-armed rogue state? No. No, not when nuclear reactors are on fire. But they’re doing it anyway.”