It’s pretty normal for Tucker Carlson to spend a segment during a Friday night episode talking about something other than the current political situation, though he certainly doesn’t usually do it during the opening segment — lately he’s been more about talking about aliens at the end of the show. But this Friday he tried something new.

“There is a huge amount going on right now, as you know. Really a torrent of news, historic amounts. To begin tonight, we are going to ignore all of it. We’ve never done that before. This is a news show, brought to you on a news channel,” Tucker said, though a judge ruled in September that Carlson is actually not a credible source of news.

Tucker then said he wanted to “take a 20-minute break from developments” — a statement that wasn’t true at all. While Carlson’s opening segment usually goes on for 20 minutes, this time it was only ten.

“So many things seem so completely screwed up right now that it can be overwhelming, and over time it’s also misleading. If you pay too much attention to what’s happening, you can easily conclude that America is a rotten country,” Tucker said. It was an interesting thing for him to say, considering he spends most of each episode complaining about things.

“But that’s wrong. It’s not. America is still the best there is.”

Tucker then tried to explain what’s so great about this place.

“Two things about America make it great: the country and its people. This is a truly beautiful place. That’s the first thing. If you’re absorbed in your phone all day, it’s easy to forget that, but look around. It’s stunning. Switzerland has the Alps, Zimbabwe has Victoria Falls, but multiply that by an entire continent and you’ve got what we have. America,” Tucker said.

“From the islands of Puget Sound to the islands in Casco Bay, to the Rockies and the Badlands and the Upper Peninsula and the Appalachian Mountains in between. Spend a day hiking to the Shoshone National Forest in Wyoming. You might not see another person. How can a place so gorgeous be so empty?”

National forests and parks and landmarks are empty because they are protected lands that cannot be legally developed. Those protections exist so as to make sure those places say beautiful. Republicans oppose those protections.

“We’ve got a lot of those here. Wake up in Big Sur, California some morning. The smell of redwoods and salt air will change you. You’ll feel things you inherited from your ancestors, coming from places the modern world cannot touch,” Tucker went on.

“We are blessed to live in a place like this. More blessed than we acknowledge. No matter what happens next, no matter who becomes the President now or in the future. Nothing can diminish the dignity of an eastern white pine towering above the spruce in a New England forest. All of it is ours to enjoy. Thank God.”

Tucker then got to talking about the American people.

“And we’ve got a lot of people to enjoy it with, an awful lot. Americans are still the best people, misguided as we sometimes are,” Tucker said.

“This isn’t an especially religious country anymore, but surveys on churchgoing do not tell the whole story. Even now most Americans know they’re not really in charge of the universe. They know there’s something bigger out there, bigger than all of us combined. And when you understand that, when you know in your bones how small you are and how short the ride is likely to be, you tend to treat people better. Americans do.”

Then Tucker’s rant, which he expressed with more of an edge than real enthusiasm, took a surprising new turn. 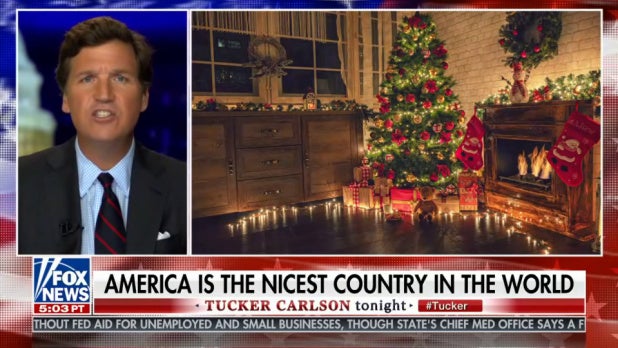 “Don’t let cable news fool you. Don’t let us fool you. This is a profoundly nice country. The nicest in the world. Americans are kind to children, to pets, to strangers. We give more money to charity than any other place. We tip our waiters more. There’s no country on earth you’d rather be lost in — someone will help you. In America, we don’t eat dogs. We rescue them.” Tucker said, making what could be interpreted as a racist jab at East Asia while the chyron read “AMERICA IS THE NICEST COUNTRY IN THE WORLD.”

“They sleep on the bed. We give them funny names. We cry when they die. It’s a sweet country. In some ways it’s getting better. The music’s definitely improving. So is the food. believe it or not, we still make things here, and a lot of them are pretty good. That probably won’t change.”

Despite his promise to skimp on the politics, Tucker got political at the end of his little speech.

“Americans love innovation, but they’re distrustful of anyone’s radical plans for the future. Most people here don’t want an abrupt reshuffling of everything. They prefer incremental improvement. That’s why we’ve had only one revolution. It’s why we fought off the metric system all these years and thank heaven we have,” Tucker said, without explaining why that’s a good thing, or even matters at all.

Carlson wrapped it up by talking about how much he loves Christmas.

“It’s why we still have Christmas, and always will,” Tucker said, without explaining what people’s enjoyment of Christmas, which people all over the world celebrate, has to do with this topic.

“Christmas in America is great. Even if you don’t really understand what it’s about, and many people don’t. It’s still the happiest time of the year, and therefore it’s the most American. America is a happy country, despite everything. Our happiness is fundamental. It’s in our founding documents.”

You can watch the quoted portion of Friday’s episode of “Tucker Carlson Tonight” in the video embedded up at the top of this article.