A representative for Trinity College confirmed the veracity of the yearbook entry to TheWrap after a screenshot of it went viral on Twitter. The spokesperson pointed to a digitized version of the yearbook, which features the entry on page 186, and added that the so-called “society” didn’t seem to exist at the school and was only mentioned in Carlson’s entry. A review of the yearbook by TheWrap found no other mentions of a “Dan White Society.”

“While I cannot speak to the yearbook process in 1991, current practice is that only a student’s name, home state and/or country, and the student’s major are listed with their photos,” the Trinity College representative said when asked whether Carlson submitted the identifier himself. 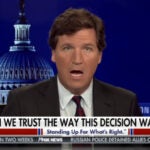 Also Read:
Tucker Carlson: Jurors Only Convicted Chauvin Because They Were Scared (Video)

A Fox News representative did not immediately return a request for comment.

Among the other affiliations listed in Carlson’s entry are “Christian Fellowship” and the Jesse Helms Foundation, which bills itself as “a non-profit, non-political foundation which provides quality educational lectures, training schools and events focused on the principles of our founding fathers, traditional American values and the causes which United States Senator Jesse Helms championed throughout his 30-year career.”

Helms was a leader in the conservative movement and, according to a 2008 obituary, was staunchly opposed to homosexuality. For much of his career, Helms opposed federal spending on AIDS on the grounds that he believed the disease was the result of homosexual behavior. Helms’ legacy also included opposition to the civil rights movement and abortion rights, and a 16-day filibuster against establishing Martin Luther King Jr. Day as a federal holiday.

On Tuesday night, Carlson accused The Washington Post’s owner, Jeff Bezos, of conducting “opposition research” and said the Post’s media columnist, Erik Wemple, was pulling out his old college yearbook to see if Carlson had “done anything naughty at the age of 19.” 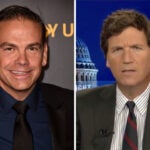 “Jeff Bezos had one of his minions, a mentally unbalanced middle-aged man called Erik Wemple, pull our dusty college yearbook and call around and see if we’d done anything naughty at the age of 19,” Carlson said on “Tucker Carlson Tonight.” “That sounds like fun. Let us know if you hear any good stories. But before Bezos drops any more of his billions on opposition research, he should know that it will not affect any election outcome. This is a news show, not a political campaign. No one here is running for anything or plans to.”

It’s not yet clear what exactly the Dan White Society was or whether Carlson will address this latest controversy during his 8 p.m. ET show Wednesday night. What is clear, however, is that Carlson believes inappropriate old yearbook content is fair game for criticism: In 2020, he called Virginia Governor Ralph Northam “Governor Klan Robes Blackface,” referring to a previously uncovered set of yearbook photos showing the then-student in a Ku Klux Klan costume and blackface.