On Wednesday Maryland Democratic congressman Jamie Raskin made public an unsigned letter, attributed to anonymous Capitol Police officers, that harshly criticized Republican leaders for opposing a commission to investigate the deadly Jan. 6 insurrection. But as far as Tucker Carlson is concerned, that letter might as well be “a ransom note.”

Tucker Carlson was really mad about the letter on his show Thursday night, and among other things he claimed that its authors were using their “muscle,” presumably as a form of intimidation.

“Imagine getting it from one of your own bodyguards,” Tucker said of the letter to Congress. “It might be enough to make you rethink your position, which was the point of it… What other partisan demands will they make in the future?”

Tucker accused Capitol police of being “effectively an armed political action committee,” and wondered if members of the Capitol Police would have “other partisan demands” in the future. “Do Capitol Police have strong views on voter ID laws? How about taxpayer-funded abortion?” he asked. Tucker didn’t mention that several people died as a direct result of the deadly riot, including three Capitol officers — one who died after being attacked by rioters, and two who later died by suicide. 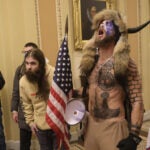 Also Read:
America’s Day of Shame: Scenes From US Capitol Under Siege by MAGA Mob (Photos)

Tucker also said the thought the letter is “setting a very bad precedent” and accused Democrats and CNN of allowing the Capitol Police to undermine the democratic process by making their opinions known. Tucker said CNN knows who authored the letter but won’t share the people’s names because, in his view, “‘the Capitol Police are allies of CNN and CNN has an obligation to protect them.” He provided no evidence for this extraordinary claim.

Then again, in 2020 a judge ruled Tucker is not a credible source of news.

It’s unknown who and how many Capitol officers were involved in the letter. Raskin told The Hill that the officer who delivered it claimed “about 40-50” participated — neither Raskin nor media outlets were able to confirm that number. For its part, U.S. Capitol Police said in a statement that the letter was not in any way official — Raskin never claimed otherwise — and said it takes no position on legislation.

“It is inconceivable that some of the Members we protect, would downplay the events of January 6th,” the letter said.

35 Republican members of the House voted to pass the bill, possibly spurred on by an impassioned speech Democratic congressman from Ohio Tim Ryan, who urged both sides of the aisle to unite to investigate the Jan. 6 riot.