Fox News’ Tucker Carlson ended his 17-minute monologue on Afghan refugees Wednesday night by going after Rep. Ilhan Omar, who has sparred with him indirectly for years.

Carlson rolled some of Omar’s recent comments on accepting refugees, noting that she herself was a refugee from Somalia, before saying he wasn’t going to attack her: “We’re not going to do that. The truth is this is our fault. She is our fault. Ilhan Omar is living proof that we are not very good at resettling refugees. She was saved from a refugee camp in Kenya as a child by the kindness and generosity of America and yet she has grown to hate America and the people who live here. Where did she learn those attitudes? Well, of course, in college — our colleges. We taught her to hate our country. She became worse after she got here.” 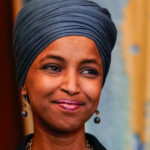 On Tuesday, Omar went after Fox News for creating a “frenzy” around the resettlement of Afghan refugees. Over the weekend, Afghanistan fell to control of the Taliban.

Omar told MSNBC’s Joy Reid, “The reality is that we’ve been in this conflict — in this war — for 20 years. There are people who’ve helped us in this mission. There are people whose lives are going to be at risk and we have to do everything that we can to bring them to safety and we’ve done this many times where we have evacuated people, airlifted them into safe spaces so that we can properly vet them and have them come to the United States as vetted refugees. I know a little bit about that, you know?”

Prior to Omar’s statements on “The ReidOut,” Reid rolled clips Carlson and Laura Ingraham objecting to America taking in those fleeing Afghanistan.

Omar described that as “not surprising” and part of the Fox News “playbook,” but also focused her half of the conversation on her own experiences.

“I know what it’s like to be a child in a family scrambling for safety in a war-torn country. I know the rigorous process you go through to get vetted as a refugee. We are the most vetted people who come to the United States. The process is long and it doesn’t just end when you arrive on the shores. It continues for years until you are eligible for citizenship at five years of entrance,” she explained.