“‘Paternity leave,’ they call it,” quipped the high-rated primetime host. “Trying to figure out how to breastfeed. No word on how that went.” 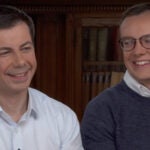 “Did @TuckerCarlson mock his own @FoxNews colleagues in the same fashion?” asked MSNBC’s Stephanie Ruhle, linking to an article from April. The piece details how Fox News host Jesse Watters became pro-paternity leave after the birth of his third child. “Fox & Friends First” host Todd Piro also took six weeks of paternity leave earlier this year, which is the amount of paid time Fox News Media offers all parents.

Others criticized Carlson for emasculating a veteran, posting photos of Buttigieg in his military uniform. VoteVets, an organization that works to get former servicemembers elected, tweeted, “Tucker belittles a Navy vet for being a good dad, throwing not-so-thinly veiled homophobic jabs, and lying through his teeth about current affairs.”

Actor George Takei wondered if Carlson “was abandoned as an infant and stayed that way.”

And CNN’s S.E. Cupp found a way to hit Carlson for his comments while also criticizing the GOP at large for its continued reliance on and deference to former president Donald Trump: “Very weird to mock paternity leave — which is so valuable — as merely ‘breastfeeding,’ when these guys can’t stop sucking at the Trump teat.”

Buttigieg is the country’s first openly gay person to hold a Senate-confirmed position in the Cabinet. After his unsuccessful bid for president in 2020, he was sworn in as the secretary of transportation in February.

The Democrat announced the birth of the couple’s newborn twins on his social media platforms in September, writing, “Chasten and I are beyond thankful for all the kind wishes since first sharing the news that we’re becoming parents. We are delighted to welcome Penelope Rose and Joseph August Buttigieg to our family.”

He also shared a black and white photo of himself and Chasten beaming while holding Penelope and Joseph in their arms in a hospital bed.