Tucker Carlson is concerned that critical race theory, or something he says is “critical race theory,” is apparently sweeping the nation’s schools and came up with a pretty drastic idea as to how to prevent that — cameras in every classroom to monitor what teachers tell students.

Yep, Tucker, who has repeatedly warned against what he says are threats to free speech from teachers, thinks teachers should be policed for their speech. He also suggested that there should be some kind of “civilian review board” to “oversee” the teachers’ work to make sure that it conforms to certain standards. 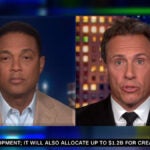 Tucker did, perhaps unintentionally, make a good point during his rant, which is that it’s unclear how many schools K-12 are actually trying to implement new teachings modeled on critical race theory.

“How widespread is it? Well, we can’t really be sure until we finally get cameras in the classroom as we put them on the chest of police officers; Until we finally get a civilian review board in every town in America to oversee the people teaching your children forming their minds,” Tucker said. “And let’s hope we get both of those very soon. But until we do, we can’t know exactly how widespread this is.”

Critical race theory was first taught in the 1970s and advocated for by Columbia University law professor Kimberlé Crenshaw. The concept, largely taught in law schools, argues that white supremacy remains a key part of how the laws, institutions and penal systems in the U.S. were developed and are today. A recent Wall Street Journal explainer noted, critical race theory “rejects the idea that laws are inherently neutral, even if they are sometimes applied unevenly.”

Opponents of the theory generally avoid contending with that and instead argue that teaching American history in that manner is merely a way to make white people feel guilty and allege that it inflames, rather than explains racism in America. During tonight’s show, Tucker literally called Critical Race Theory “anti-white.”

As of May three states enacted bills prohibiting the teaching of principles that could be considered critical race theory, and 13 other states considered prohibiting it.

We would add also that putting big brother style authoritarianism into classrooms probably won’t create a positive learning environment. But for now it looks like conservative activists are attempting to popularize Tucker’s idea.