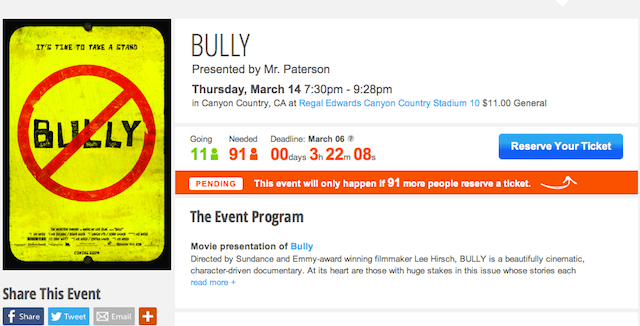 Just as Kickstarter and Indiegogo have revolutionized the way independent filmmakers can finance their films, Tugg has begun to have an impact on the way filmmakers distribute them.

The web platform, which lets people pick a film they want to see in theaters and gather support for screenings, announced a series of milestones on Wednesday in advance of this year’s South by Southwest Festival.

The service launched at the festival last year and has since amassed a library of more than 1,100 films ranging from Buster Keaton’s landmark comedy “The General” to 2012 indie sensation “Beasts of the Southern Wild.”

Via partnerships with exhibitors including Alamo Drafthouse Cinema, AMC Theatres and Regal Cinemas, Tugg facilitated screenings for 180 different films in more than 300 cities in the past year.

At a time when many filmmakers have to accept digital and VOD releases rather than theatrical bows, Tugg offers many of them a way to crowdsource a theatrical release.

“A year ago it launched as an idea and there were a lot of questions as to whether people would interact with movies on this level and if theaters could facilitate it. Here we are a year later and something that was a theory has now landed,” co-founder Nicolas Gonda told TheWrap. “It’s been effective and is growing exponentially.”

Gonda decided to launch Tugg after extensive work with director Terrence Malick. He was a post-production assistant to Malick on “The New World,” co-produced “The Tree of Life” and produced the forthcoming “To the Wonder.”

“I was able to see such an incredibly artistic filmmaker constantly creating, and a very passionate base as Malick fans are,” Gonda said. “Over the years, we would see communications asking ‘can we see this film back in theaters? It never came to our town.’”

In announcing its latest milestones, Tugg cited a few success stories, such as “Honor Flight,” a documentary about World War II veterans. It grossed 56 percent of its theatrical box office after the filmmakers turned to Tugg to facilitate screenings.

“By utilizing Tugg, audiences from around the country are coming together to watch our film as it is meant to been seen – a shared experience among moviegoers in the theater,” director Dan Hayes said in a statement. “The film distribution landscape is changing and Tugg is at the forefront of technology in this field.”

So what’s next for Tugg? For one, expansion. While Tugg covers more than 75 percent of theaters in the United States, it could very well expand overseas. The company would also like to diversify the types of experiences in theaters, from adding an opening act to bringing in different types of films.

Yet Gonda said the main focus will be improving the service’s “core competence,” offering new features to promoters – the people who help bring a movie to theaters.

“We consider the promoter to be priority number one,” Gonda said. “We need new features to better arm promoters and better inform them about how they are promoting – what’s effective an what’s not. We want to enable everyday people to participate in film distribution.”