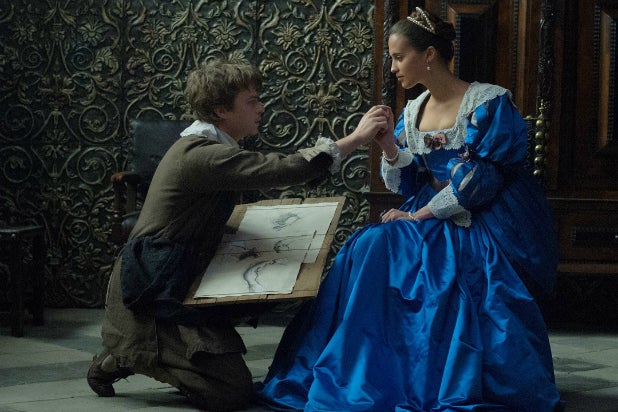 “Tulip Fever” was a hot book in 2000, a stop-and-start movie project for years afterward, an actual production in 2014, then a now-you-see-it-now-you-don’t hot potato for three more years. It’s earned the kind of Hollywood conjecture that finds a fitting corollary in the movie’s scenes of Dutch traders speculating on tulip investments during the flower’s 17th century heyday.

Would “Tulip Fever” ever show? When? In what form? Was it good? Bad? Just unlucky? Whoever placed a bet on September 1, 2017, as the official release date — after numerous appearances on the Weinstein Company schedule — collect your winnings.

The resulting movie from director Justin Chadwick (“The Other Boleyn Girl”) isn’t terrible, but it routinely flirts with terribleness: it’s disjointed, each scene torn between the pull of its sumptuous period detail and the dissonance of its mismanaged emotional structure and schematic plot. Mostly it reflects the kind of wishful thinking about beloved literary properties, evocative historical eras, and disrobed stars that results in lots of artisanal detail but a surfeit of actual filmmaking or true enchantment.

Fans of Deborah Moggach’s novel, which spins around an adulterous affair between a married woman and a struggling painter, will always be able to hold on to the experience of curling up to her twisty, panting tale. But those who see the movie first — an adaptation she’s credited with writing, along with Tom Stoppard — may be left wondering what all the fuss was about.

It’s 1634 in a bustling, tulip-crazed Amsterdam when young, God-fearing Sophia (Alicia Vikander) is carried away from the orphanage she’s known her whole life to become the new wife to wealthy older nobleman Cornelius (Christoph Waltz). When repeated attempts to produce a child prove fruitless, Cornelius opts to bolster his masculine pride in having such a beautiful, nubile wife by commissioning a portrait from a scrappy young artist named Jan (Dane DeHaan). It isn’t long, though, before the steamy glares behind Cornelius’s back result in naked time for Sophia and Jan in the painter’s cramped loft.

Their fling is complicated by the story’s other romance, between Cornelius’s lusty kitchen maid Maria (Holliday Grainger, “My Cousin Rachel”) — also the movie’s narrator — and her fishmonger beau Willem (Jack O’Connell, “Unbroken”). Under circumstances too farcical to go into (involving mistaken identity and pregnancies real and fake), Sophia and Jan are left trying to get out from under her merchant husband’s grip by making a quick killing in the increasingly bubble-worthy illegal tulip market, an underground auction animating Amsterdam’s barrooms at night. Prized above all: the chance that a future parcel of bulbs might produce the rare white tulip with a violent, breathtaking slash of crimson.

The hope for a movie like “Tulip Fever” is that its disparate characters and intersecting storylines produce a kind of carousel atmosphere of passion, greed, desperation and chase. But Chadwick, perhaps worried that the notion of “costume drama” spelled boredom, treats the material like it needed the Paul Greengrass touch. It’s relentlessly in motion, following characters down alleys, along the docks, up staircases, through crowded bars, and into rooms where doors are slammed shut and everything is said or shouted upfront. The merry-go-round always seems in danger of getting knocked off the track.

You can’t keep your attention fixed on any of it, much less grasp the intricacies of the tulip market when they’re barked quickly amongst yelling traders. Appreciating the immersive production design from Simon Elliott (“The Iron Lady”) or the textured hues of Eigil Bryld’s (“In Bruges”) cinematography becomes a game of blink-and-you’ll-miss-it when Chadwick’s handheld camera is so unnecessarily busy.

The film’s downside — besides having no visual flair regarding the showcasing of tulips — is that the central love story feels rushed and empty. (There’s more spark between Grainger and O’Connell; their joys and woes are the story’s most fully felt.) Vikander’s Sophia goes from cloistered prude to adulterer so quickly your head will spin, while DeHaan’s Jan is tossed around by the whims of the plot to the extent that he barely registers as a person.

Waltz, meanwhile, is saddled with the type of character defined only by his obstructive qualities; a late-in-the-story attempt to humanize him feels too little, too late. The small-role parade includes Matthew Morrison, Kevin McKidd and Zach Galifianakis as cohorts of Jan’s, none of whom leave a mark, while Judi Dench at least musters up some great-actor poise and grit as a character not in the novel, the orphanage’s wise Abbess, who grows tulips as well as future wives and maids, understanding a thing or two about the societal value of each. (Her lines are the only ones that show Stoppardian wit.)

Does “Tulip Fever” feel like a precious bulb poorly nurtured? Primarily it comes across as something laboriously over-handled, and any flower so treated is bound to lose its luster. After waiting so long, the strongest fragrance on display is one of sweat and mediocrity.