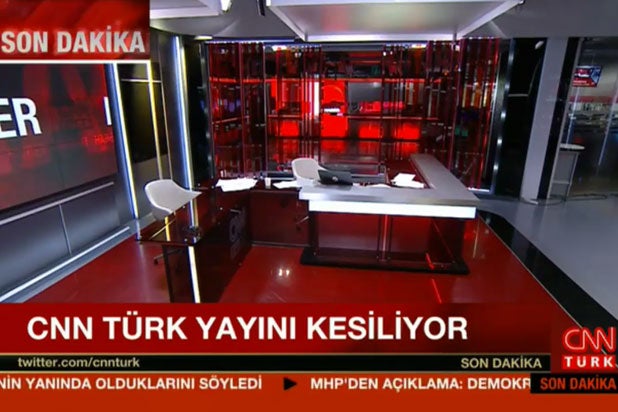 This is not a peaceful transition of power.

CNN Turk became chaotic Friday as gunmen entered the network’s studio, but someone inside managed to share video of the takeover.

On Friday afternoon PT — early Saturday in Turkey — CNN Turk streamed live from an empty set. When soldiers first entered the control room, an anchor announced on-air, “That’s it. We have to go.” One journalist was shot in the raid, according to BuzzFeed News correspondent Borzou Daragahi, citing a senior Turkey official.

Also Read: Turkey Coup: What We Know So Far

It wasn’t the first seizure of the news media in Turkey’s military coup. The Telegraph newspaper of London reported that the country’s most influential newspaper, Huyyiyet, was taken over by Turkish armed forces. Soldiers also stormed the state-run TRT and forced an anchor to read a statement saying the country was under martial law, that a curfew was in place, and that the nation was under the protection of a “peace council,” Sky News reported.

Jets flew low over the country. The Telegraph said 17 police officers had been killed in Ankara. Social media video showed a tank crushing what appeared to be a civilian car. Other social media video showed bodies in the street, one without a head. Information came fast and furious, and no one knew who, if anyone, was in charge. President Obama called for calm.

CNN Turk has since resumed broadcasting.

CNN’s Brian Stelter explained via Twitter Friday that CNN Turk launched in 1999 and is run by local journalists without input from CNN parent company Turner, which licenses the brand to the network.