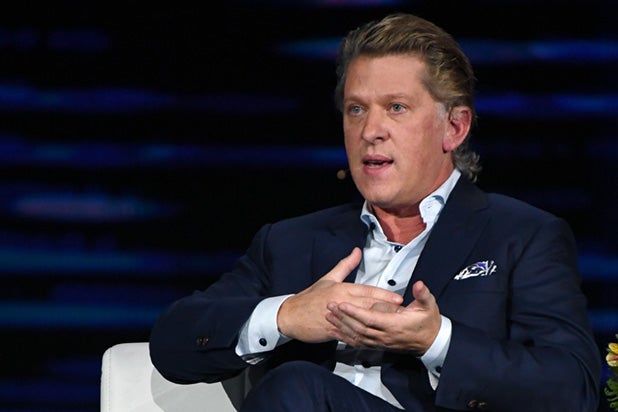 The news was announced in an internal memo to employees by John Stankey, head of AT&T’s new media division following a reorganization of the two companies.

“We have changed how Turner is organized given that John Martin will no longer be with the company as a result of the merger,” Stankey wrote. “This initial Turner org structure will allow me to work more closely with more Turner leaders and accelerate my personal learning of the business as we define our shared priorities across the company.”

Stankey also said that Time Warner would be rebranded as WarnerMedia to avoid confusion with Time Warner, the former cable company.

“WarnerMedia will largely be a naming convention to refer to the collection of brands and businesses of the former Time Warner Inc.,” he said. “It will ultimately occupy an even lower profile than the Time Warner Inc. brand. Our important customer-facing brands — HBO, CNN, Warner Bros., TNT, etc. — will all remain unchanged.”

The new leadership structure of WarnerMedia will add AT&T exec Jim Meza as executive vice president and general counsel, and will be organized as follows:

After an unusually long and bumpy road getting here, I am delighted and honored to be joining the best team in media and entertainment. I hope you share my enthusiasm for the special opportunity we have to build on all you’ve accomplished. We have a unique opportunity to truly lead in the transformation that’s taking place across media and entertainment, direct-to-consumer distribution and technology. We are at a rare inflection point where the direction and structure of the content and distribution industries — which are central to how almost everyone on the planet relates to society and those around them — gets shaped for future decades.

As you know by now, Jeff Bewkes has elected to retire after supporting me through a brief transition period. I couldn’t be more appreciative of the support he has afforded me through this extended approval process. Jeff has led this organization through a remarkable period of growth and value creation for TWX owners. It is a testimony to his terrific leadership and the accomplishments of the entire team, including those executives who have chosen to depart Time Warner with the closing of the transaction.

We have a very talented and experienced team that is well-suited to address the new opportunities and emerging challenges we will face in the years to come. Here’s the new operating structure for my immediate leadership team. You’ll note that we have changed how Turner is organized given that John Martin will no longer be with the company as a result of the merger. This initial Turner org structure will allow me to work more closely with more Turner leaders and accelerate my personal learning of the business as we define our shared priorities across the company.

I am sure you have questions about what the merger means for you, personally. Candidly, that’s hard to answer on an individual level in a note like this. But at a broad level, I can tell you that the primary mission and focus of each of the operating divisions remains the same. HBO, Turner and Warner Bros. are each successful, well-run businesses with great cultures and amazing creative talent. Their daily operations will see little change. But because we are now a subsidiary of AT&T Inc., many of the redundant corporate support functions between our companies at the HQ/holding company level will be eliminated in the coming months. That said, we will continue to maintain a small operating staff in support of the media company.

AT&T and Time Warner are incredibly storied and capable companies. However, both companies face an industry structure and competitive landscape that clearly places a premium on innovation and speed like no other time in our respective histories. Our past success does not guarantee future prosperity. There are some new plays to be developed and executed to secure our next decade of growth and success, plays that will require the combined assets and capabilities of both companies.

Over the next few days, the division leaders will host open employee forums in New York, Atlanta and LA to discuss the road ahead. I look forward to meeting you and fielding your questions. I don’t expect that these sessions will answer all your questions. But I hope they will start a dialogue and provide further insight on how the combined company might address industry challenges of consolidation, vertical integration, direct to consumer models, data/advertising innovation and globalization. Spoiler alert — I won’t be offering my views on what content we should be producing next year. I have tremendous respect for the world-class creative talent we have throughout the company. My job is to help you continue doing what you do better than anyone, which is why my focus will be on business strategy, distribution, technology/platforms and capital allocation.

I also want to share with you that we are retiring the Time Warner Inc. holding company “brand” and replacing it with WarnerMedia. WarnerMedia will largely be a naming convention to refer to the collection of brands and businesses of the former Time Warner Inc. It will ultimately occupy an even lower profile than the Time Warner Inc. brand. Our important customer-facing brands — HBO, CNN, Warner Bros., TNT, etc. — will all remain unchanged. So why change the Time Warner name? The simple answer is that it creates confusion amongst our stakeholders who never learned to distinguish between Time Warner, the media company, and Time Warner, the former cable company. Our consumer research suggests this confusion isn’t going away any time soon. So, it is easier and more economical to change the name, than invest in advertising to resolve the confusion.

Why WarnerMedia? The short answer is that it tested very well externally as a naming convention that holds the valuable HBO, Turner and Warner Bros. brands. In addition, we felt that maintaining an element of the proud, established and successful Time Warner is a testament and sign of respect for both its history and for you, as architects of that legacy. That legacy isn’t just the Warner Communications company, but all the media companies that made up the Time Warner family. The legacy of one company over the other did not win or lose in this change. What matters most is the vibrancy and health of the customer-facing brands, which are among the very best in the industry today. I’m confident that together we will take those brands to new heights as we combine the respective strengths of WarnerMedia and AT&T in the coming years. WarnerMedia also allows some initial freedom and separation from the AT&T brand as we form and navigate a new presence in the entertainment industry.

Finally, to welcome you to the AT&T family, you’re eligible for robust employee discounts on our products and services. To learn more about these and the other discounts available to you, click here.

I look forward to meeting many of you in the coming months as I settle into my new role working with — and learning from — the best media and entertainment team around. It is truly a unique opportunity we share!