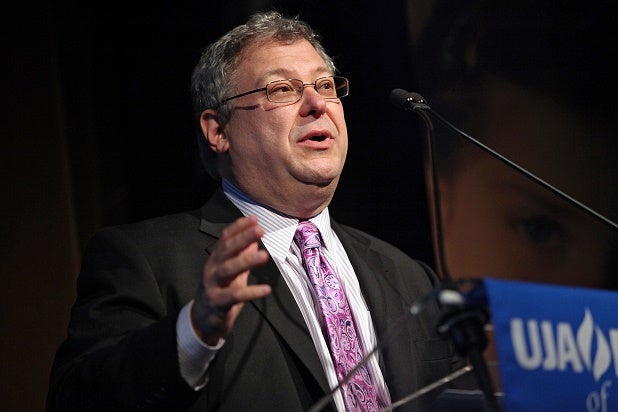 Steve Koonin is exiting his post as president of Turner Entertainment Networks to become CEO of the Atlanta Hawks, the team announced Sunday.

“Steve Koonin’s reputation as a game changer in both marketing and media makes him the ideal leader to usher the Atlanta Hawks into a new era. He has created a legacy as an expert in sports marketing, television, branding and digital media,” said Hawks majority owner Bruce Levenson in a statement. “The Hawks are thrilled that Steve is joining the ownership group as both our CEO and a partner.”

Koonin has been the head of Turner Entertainment since 2000, overseeing TNT, TBS and TruTV. The new post is a natural transition for the executive. The Turner networks broadcast NBA, Major League Baseball and the NCAA Men’s Basketball Tournament. And Koonin, an Atlanta native, spent 14 years at Coca-Cola as the vice president of consumer marketing.

During his tenure at Turner Entertainment, Koonin was credited with bringing talk show host Conan O’Brien to TBS in 2010, in a surprise move that bumped comedian George Lopez‘s 5-month-old talk show. He also led network re-brandings with TNT: We Know Drama and TBS: Very Funny. And it was under his leadership that TNT in recent years added dramas including “The Closer,” Rizzoli & Isles” and “Southland.”

Turner president David Levy, who is expected to guide the Turner networks through the upcoming upfront ad sales, said Sunday that a search for a replacement would begin immediately.

Here’s an internal memo Koonin sent to his Turner colleagues:

I set my guiding principle as a very young man that living in Atlanta, the home of my family and friends for multiple generations, was the key for lifetime happiness. For the past 28 years, I have been able to live and work in a senior leadership role in my hometown for two fantastic companies. I was very lucky to be a part of Coca-Cola’s incredible global growth in the 80’s and 90’s.

In February 2000, I walked into Turner Broadcasting after being invited to run TNT. I was 42 years old, had a full head of brown hair and dreams of taking the consumer lessons I learned from Coca-Cola and apply them to TV. I am truly gratified in saying that TNT, TBS, TCM and truTV have become familiar and beloved brands to TV viewers all over the USA.

Building strong brands and a continual focus on building a culture at TEN are just two of the major accomplishments that occurred on our collective watch. In addition to our brands and culture, we collectively accomplished a 10 year plus vision of becoming “broadcast replacement”. The dynamic combination of our relentless parity with broadcast messaging, hit original programming that won critical praise and record setting ratings, along with our best in class publicity and marketing has allowed us to plant our flag at the summit of this lofty goal. It is now an established fact that cable TV is every bit as good, if not better than, broadcast television.

It is no secret that I have a passionate love of sports, particularly for our local teams. In the past few months, I was invited to become an investor in the Atlanta Hawks. During our investor conversations, it became quickly apparent that the Hawks needed local leadership as well as a face and voice for the franchise. I have accepted the position of CEO and Part-Owner of the Atlanta Hawks. The job is consistent with my desire to make a difference in my community and finish my career in Atlanta.

I learned many lessons in my 14 years at Turner that I will take with me to my new position as CEO and an Owner of the Hawks. I look at this new opportunity as the chance to be a steward of another Ted Turner legacy. As a native Atlantan, I vividly remember being at one of the first Hawks games after they made the move from St. Louis. The Hawks came to life when Ted took over the team in the 70’s. Over time and under Ted’s leadership, the Hawks were the class of the Atlanta sports scene. I am hoping that we can reignite that spark and help the Hawks bring an NBA Championship to our hometown of Atlanta. I keep telling myself that I am not leaving Turner, but rather I have chosen a transfer to another division.

Now comes the hard part. I am very glad my iPad is waterproof. Absolutely none of my success would be possible without the amazing talents of the people that worked with me day in and day out for the past 5156 days. I have watched my direct report leadership teams grow into world class strategy, finance, PR, business affairs, on-air, marketing, programming, business operations, sponsorship, digital and brand-building executives of all four of our networks.

I have also been so incredibly lucky to watch you grow in your personal and professional lives. Every day, you display the values of integrity, community, family and company that make you so successful today and will continue to in the future. I have watched you recruit and grow the next generation of leadership and I am sure they will keep these wonderful networks growing and thriving for years to come.

Here at Turner, I have certainly had the time of my life and I hope you have as well. I wish all of you lots of love and good wishes for the future. Please root for the Hawks, and rest assured that I will always be cheering for our networks and you.