Steve Koonin’s been running Turner’s entertainment networks for a decade now. He oversaw the rebranding of TNT ("We Know Drama"), TBS ("Very Funny") and CourtTV (now TruTV). He helped launch big shows such as "The Closer" and "Saving Grace." 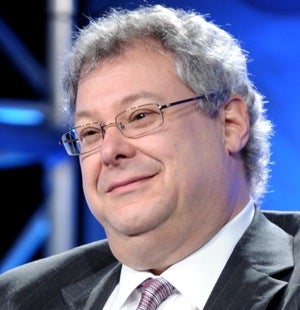 Landing Conan O’Brien, though, has to be Koonin’s biggest deal yet. We caught up with him Monday just hours after the Coco pact was announced.

This is big. Is it a game-changer for cable vs. broadcast?
I don’t know. I’m going to let you decide. The most important point is: Conan chose TBS. And he had lots of different opportunities.

We’ve been very vociferous and vocal about trying to grow our business and saying we’re as good as broadcast. To have someone like Conan (come to TBS) … validates what we’ve been saying. We are every bit as good as broadcast television. It’s a win for the whole (cable industry).

So when did you decide to go for Coco?
We were looking at our long-range planning and there was just a moment in time where we had some real clarity. The guys on CBS and NBC are getting older, and their audience is getting almost as old. We saw that we could have two guys in their 40s attract viewers in their 20s and 30s who will hopefully be on TBS for a long, long time.

And how did you decide to woo him?
We said, let’s create a proposition for Conan that would make him think long and hard about not doing business with us. And that’s what we did.

Our whole pitch was: Change the dialogue. Don’t do the same thing. Move from an employee to an owner. Move from being a box on the schedule to being a transformative entity. Move from broadcast to cable.

It was all about changing the dialogue. We have a different environment (on TBS). (Conan’s) not led into by whatever crime is happening locally.

Lopez was key, right?
We included George Lopez in the process. This should be very beneficial to Lopez’s show. It should be very positive. George saw it the way we intended it, which was an enhancement.

How does Conan help TBS, beyond just the addition of his show?
One of the things we’re so excited about it (that Conan) can help attract even more talent to the network for Michael Wright and his group. It’s all about the fact that talent makes hit programs, not executives.

At TNT, we’ve been so successful with Ray Romano, Kyra Sedgwick, Holly Hunter, Jada Pinkett Smith — just bringing in very talented people. And we have the same recipe for TBS. Conan is a giant step up in the comedy community for any network. We’re just very thankful he liked what we had to say.

The bulk of your comedy strategy has been off-network repeats. Is the deal with Conan a sign you want to step up your development of scripted comedy?
We’re shooting four pilots now. Between Conan and George, will have over 300 hours of comedy on our air. We look at this in long-term increments. And we think having Conan and George will attract more top-tier comics to our network. That’s the plan, that’s the play. I can’t say we’ll add two hours here or four hours there. But I think we’ve shown the community today we have a real big appetite.

You didn’t waste any time starting promotion for Conan. Did you work with his team on the strategy?
They were surprised and delighted we went on the air tonight. We sent them the spot at 6 p.m. (Sunday) to get their blessing. When we inked a deal Friday night, I placed a call to our head of on-air and said, "Can you cook something up for me?" And they came back with a great, simple piece that really said it all. I sent it to Gavin and Conan and they loved it.

Who’s your competition at 11 p.m.? What’s your audience?
We’re looking for youth. George’s median age is 33. Adult Swim has done a genius job, but their median age is 19. That’s not really our audience. I’m hoping we have a lot of people from 25 to 45 tune in.

I think, if I’m not mistaken, only 30 percent of people watching TV at 11:30 are watching late night TV as we define it in the industry. So there’s a great big pool of people and a real big opportunity for us. … This surprised a lot of people, but when you think about it, it makes a lot of sense for us.

Any more marketing plans you can share?
It will be a big, kick- ass campaign. And you can quote me on that.

Why launch in November rather than September?
We’ve got the American League Championship Series. It’s a phenomenal promotional platform.

Will Conan have the time he needs to find an audience on cable?
You can look at our track record. We’re very nurturing. But I think Conan’s going to be successful from the start. His success is not one of my worries.