According to Disney-Pixar’s new animated feature, “Growing up is a beast,” and in this case, they mean literally.

On Tuesday, Pixar dropped the trailer for the upcoming film “Turning Red,” which follows 13-year-old Mei Lee, a young girl (voiced by Rosalie Chiang) who turns into an oversized red panda whenever she’s stressed or excited.

Pixar director Domee Shi, who won an Oscar for her 2018 short, “Bao,” serves as writer and director. Sandra Oh will lend her talents to the film as Mei Lee’s overprotective helicopter- mother, Ming who, in the trailer, doesn’t appear to understand that spying on Mei at school isn’t beneficial for her daughter’s mental well-being.

The 1-minute, 49-second teaser doesn’t reveal too much but gives viewers a good look at Mei as a giant red panda anxiously romping over the rooftops of her neighborhood. As a millennial bonus, the 1999 Backstreet Boys hit “Larger than Life” accompanies the gleefully trippy antics, promising another quality Pixar hit down the pipeline. 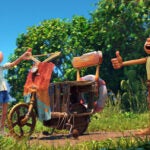