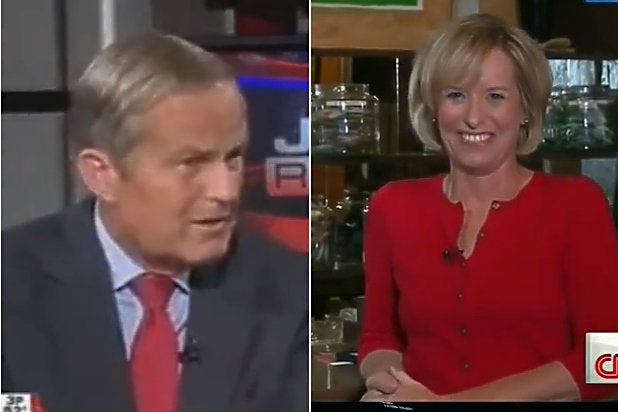 As much as critics and viewers alike complain about the lack of substance seen on TV news, these same people have certainly been guilty of indulging in an on-air cable news food fight from time to time themselves.

For Halloween, TheWrap has selected its top 5 most horrifying TV news segments of all time. The following moved us to cringe, scream, and in some cases, laugh uncontrollably.

1.  Legitimate horror
In a local St. Louis interview, then-Missouri Senate candidate Todd Akin answered a question on whether abortion should be legal in the instance of rape.

“If it’s a legitimate rape, the female body has ways to try and shut that whole things down,” Akin said on the Jaco report.

Akin’s comment, which took over TV news for a full week and derailed his chances at a Senate victory, were terrifying to politicians and pundits on both sides of the political spectrum. Obviously, Democrats pounced, but Republicans objected, too. Then-Republican nominee for president, Mitt Romney, called Akin’s comments  “insulting, inexcusable, and, frankly, wrong.”

From a journalistic point of view, one of the more head-scratching aspects of this interview was directly after Akin made the comment. “Let’s go to the economy,” interviewer Charles Jaco pivoted. It seems he heard Akin make the medical comment, but didn’t find a follow-up necessary.  It would’ve  been great to be a fly on the wall in meetings between Jaco and his producers after the interview.

2. Somebody have too much Tea?/ Ratigan’s ruckus
We have a tie for number 2.

First, it’s rare for a cable news segment to be so powerful its aftershock sparks a movement. But CNBC’s Rick Santelli is credited with doing just that in his 2009 rant about the country needing another Tea Party.

“We’re thinking of having a Chicago Tea Party in July!” Santelli said to rousing applause in Chicago. “All you capitalists that want to show up to Lake Michigan, I’m gonna start organizing it.” Santelli went on to say the Founding Fathers would be rolling over in their graves if they saw what the Obama administration was doing to the economy.

Santelli going absolutely bonkers on business news airwaves that don’t often create viral hits was quite the surprise. The most interest part was wondering if his rant would explode into something more: “Mayor Daley is marshaling the police right now,” host Joe Kernen said as Santelli sounded off.

Tying with Santelli is his former CNBC colleague, Dylan Ratigan. While hosting a show at MSNBC, Ratigan went on a similar tirade over the economy and Washington’s broken political system.

“I’m sorry to lose my temper, but I’ll tell you what–I’ve been coming on TV for three years doing this!” Ratigan shouted as his panel of three guests looked at him, growing more concerned by the rising decibel level in his voice. “There’s a refusal on both the Democratic and Republican side of the aisle to acknowledge the mathematical problem, which is the United State of America is being extracted.”

“A little more emotional than I anticipated getting at work this afternoon,” Ratigan concluded. He left MSNBC in 2012.

3. Journalism as a higher calling
When a reporter gets so in-depth into a topic, she gets high on-air, it has to make the list. And that’s exactly what happened when CNN’s Randi Kaye reported on the growing “ganjapreneurs” industry in Colorado.  After riding around all day with veteran weed connoisseurs, Kaye reported for “Anderson Cooper 360.”

“You know Anderson, it was top-notch,” she told Cooper after taking a marijuana-filled ride. “I think I need to come home,” Kaye said, giggling uncontrollably, clearly high from a rigorous day of reporting.

The most intriguing part of this segment was the logistics: not that we’re weed experts, but for most people, getting high typically restricts more creative processes — like writing and producing full-scale cable news video packages, much less getting up and speaking semi-intelligently on live TV. How Kaye spent all day getting so second-hand high the giggles overtook her yet still managed to pull off the interview is one for the TV news history books.

4.  Frank-ly speaking, this got a little out of hand
Bill O’Reilly‘s “no spin zone” has created many heated moments over the years, but rarely has a segment left viewers worried whether O’Reilly was about to light on fire. Enter former Congressman Barney Frank, who upon coming on, was being called on by O’Reilly to resign from the House Finance Committee over Fannie Mae and Freddie Mac.

“Stop the BS here, stop the crap!” O’Reilly shouted over Frank. “None of this was your fault, oh no! People lost millions of dollars; it wasn’t your fault, C’mon you coward!” At this point, it looked like O’Reilly was going to jump out of the satellite TV box and whack Frank in the face. “I’m not going to be bullied by your ranting!” Frank shot back. “You can rant all you want, you’re not going to shut me up.”

“You don’t listen at all, or maybe you’re listening and you’re too dumb to understand,” Frank jabbed at O’Reilly. “You’re the brilliant guy who presided over the biggest financial collapse in federal history,” O’Reilly concluded.

The eye-catching part of this interview was how quickly it descended into chaos.  Typically, a TV news shoutfest requires a little tempered animosity to build before full-scale theatrics. In this instance, it took just 1 minute and 20 seconds after Frank first started speaking for O’Reilly to lose it.

MSNBC might have had too much to drink this past Cinco de Mayo, and they suffered a major media hangover after the fact. On Thomas Roberts’ “Way Too Early” show, the host noted the special day.

Enter his producer, Louis Burgdorf, donning a sombrero and chugging tequila as he danced across the screen rattling maracas. In a separate segment, Roberts also played with maracas, and the table on his set was adorned with another sombrero, shot glasses and plastic margarita glasses.  The sheer magnitude of stereotyping became more and more cringeworthy as the segments went on. In reaction, Hispanic groups expressed outrage and MSNBC ultimately issued a statement of apology along with on-air apologies from Roberts and Burgdorf.