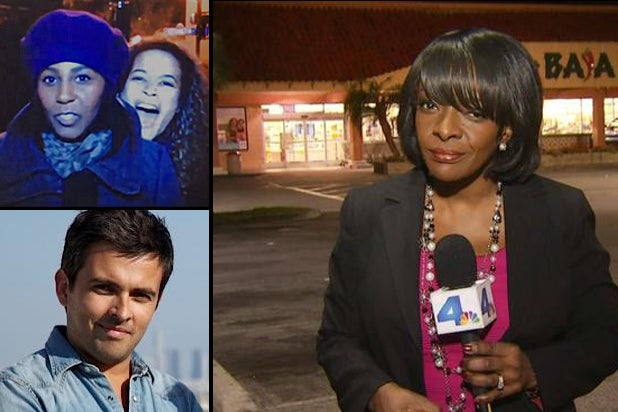 It’s not a new problem, but it’s one that by most accounts is getting worse.

A growing number of TV news reporters say over the past year, there has been an increase in the level of sexually explicit taunts they face while covering stories on public streets. The disturbing trend involves hecklers running up and yelling, “F–k her right in the pu–y” into microphones as reporters stand in front of the camera.

“The acronym ‘F her in the P’ is constant,” NBC4 Southern California reporter Beverly White told TheWrap. “Total strangers, typically young men, shout that profanity like they have a right, and I beg to differ. It is deeply offensive and it’s infuriating.”

The obscene interruptions started to gain notoriety in May 2014. The first known incident was initially thought to have been said by a heckler during a live broadcast in Cincinnati, Ohio. The footage went viral, but the stunt turned out to be a hoax. Still, the copycat incidents are all too real.

For White, who covers general assignment news, the insults can be jarring. “Sometimes it just blows your train of thought,” she explained. “We’re accustomed to disruptions, helicopters flying overhead, barking dogs, sirens, those disruptions come with the territory. But this level of again, profanity, directed at mostly female correspondents, in the presence of a camera, is so upsetting.”

Ashley Kirklen, a morning news reporter at TV6 in Marquette, Michigan, has heard the explicit taunts as well.

“My New Year’s ball-drop story was the worst time I was heckled by people on the street,” Kirklen told TheWrap. “As a one-man band, I had to set up my own shot and record myself. People kept walking into my shot on purpose, screaming in my ear and even touching me,” she recalled. “When I got back to the station and looked back at the footage, I noticed they did stuff behind my back. I even faintly heard the ‘FHRITP’ reference in the background.”

According to experts, the problem stems from a generation of young men who grew up consuming prank-based shows like “Jackass” and “Punk’d” and feel emboldened to act out in public and film themselves doing so. Factor in the Internet and the ability to share antics on the net, and it’s a recipe for disaster.

“It’s really indicative of the misogyny and extreme sexism that’s out there in our society… It’s infuriating that there are people out there using gender-based acts to stop women from performing their professional activity.”

While the insults are usually hurled at female reporters, women are not the sole targets.

Sébastien Vuagnat, a freelance reporter-photographer who covers the western U.S. for French TV networks France 24 and M6, had hecklers shout “FHRITP” at him during a recent shoot in Las Vegas.

“It happened to me when I was there covering the fight between Pacquiao and Mayweather.” Vuagnat said. “I was there on the street trying to work on my standup, and working by myself, and it was kind of crazy because a lot of people are coming to you and especially drunk people, yelling weird things and bad words, ugly things that I can not repeat.”

Los Angeles-based Vuagnat says he is frequently approached by “very friendly” French tourists who recognize the logo on his microphone flag and want to say hello. But it’s a different story when he comes in contact with large groups of young, American men. “It gets a bit difficult, especially at night… it can be a nightmare,” he said.

According to Vuagnat, there was no shortage of rude people when he worked in Paris, but the level of disrespect is much higher in the U.S.

It happens in Canada too.

In May, a female reporter for “CityNews” in Toronto confronted a group of male soccer fans during a lengthy on-camera exchange for yelling “FHRITP” as she covered a story. “CityNews” ran footage of the incident, which quickly went viral. After having his face plastered across the Internet, one of the men, an assistant network management engineer who made $106,000 per year, was fired from his job.

White understands why the Canadian journalist argued with the men. The L.A. reporter said she recently got so fed up while covering a police chase that she decided to speak up as well.

“I spontaneously shouted at a young man, fairly recently, ‘You kiss your mother with that mouth?’ because I was so shocked that he would utter that to a stranger,” she noted. “He was in a car with friends and they shouted collectively, I’d say maybe three or four young men. So when I asked him that, he giggled and I repeated it and he repeated what he had to say. Then he sped off into the night.”

White was working under a tight deadline, but wishes she could have said more at the time.

“If I could have stopped him and talked to him, I would have said, ‘How dare you. I’m working. It’s an honest living. Nothing gives you the right to violate my workspace in that way.'”

“The more that people know about this and work together and share experiences and validate each other’s work, it sounds superficial, but we have heard from a lot of journalists that just knowing that there are other people out there supporting them is extremely helpful.”

Before joining NBC4 25 years ago, White worked as a reporter in Miami, Cincinnati, Ohio, and San Antonio, Texas. She says she never imagined that things would get this bad.

“We’re accustomed to some level of disrespect — it just comes with the job. A lot of people don’t want a camera around, and we’re often there for negative reasons. But aside from that, the profanity takes it to a new level. That’s a brand of harassment I was not expecting when I chose this profession.”