David Gerber, a prolific television producer and executive behind such groundbreaking projects as "In the Heat of the Night" and "Police Woman," has died. He was 86.

Gerber died Saturday of heart failure at University of Southern California Medical Center, with his wife of 39 years, actress Laraine Stephens, at his side. 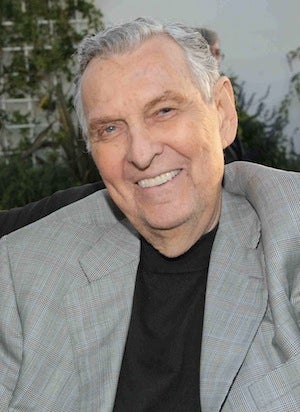 Gerber was known as an industry pioneer for taking on serious, often controversial subjects, including the Emmy winning  “Police Story” and “Police Woman,” the first successful genre series with a female lead, as well as “That’s My Mama,” one of the first comedy series featuring a full cast of African American actors.

He was also largely responsible for the television series “In the Heat of the Night” and “Beulah-Land”; the controversial Civil War miniseries that became the 12th high-rated in television history; and “Flight 93,” the six-time Emmy nominated story of the passengers of the United Airlines flight of September 11.

Born in Brooklyn, New York, Gerber served in WWII and was shot down over Germany, where he was a prisoner of war before walking across the country at liberation.

Recruited to head MGM Television in l981, Gerber was responsible for such series as “Today’s FBI,” “Seven Brides for Seven Brothers” and the Peabody award winner “George Washington” miniseries, among many successful projects. When he became Chairman and Chief Executive Officer of MGM Worldwide Television Group in l991, he was involved in the return of three impressive series, “thirtysomething,” and “The Young Riders” (ABC) and “In the Heat of the Night" (NBC).

Among numerous industry and community awards, Gerber has been recognized with his own star on the Hollywood Walk of Fame, the Caucus of Producers, Writers & Directors Lifetime Achievement, NAACP and Nosotros for his depiction of ethnic cultures on television, and Lifetime Achievements from the Casting Society of America and the Publicists Guild.