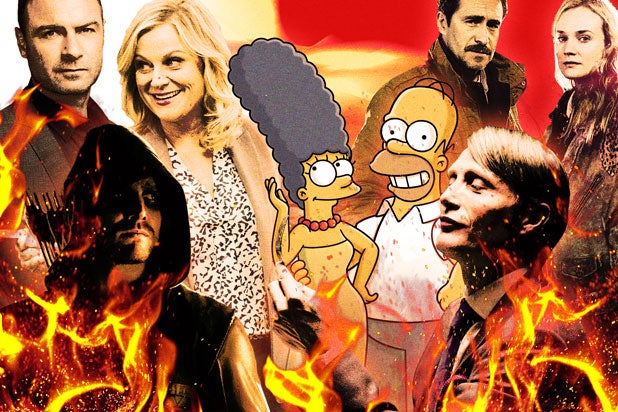 Season 2 can often times be a make-or-break moment for a television series. Sure, you’ve been brought back after a good-enough first season, but what have you done for viewers lately?

This fall sees the return of Fox’s “Sleepy Hollow,” ABC’s “The Goldbergs,” and NBC’s “Chicago PD.” Each series still has some proving to do before fans and critics alike fully embrace them. It’s a tall order but it’s possible, as proven by these 8 TV shows that took off in their sophomore seasons after experiencing a less than perfect first year run.

“Arrow”
When The CW first premiered its ambitious comic book adaptation, all the basic elements for a successful show were there, but “Arrow” took some time to find its footing. Season 1 relied on a pretty by-the-book Villain of the Week format, and Oliver’s relationship with Laurel, meant to anchor as the love story of the show, never really quite clicked the way it should have.

Season 2 tightened up storytelling a great deal, shifted to a more serialized format that dug deeper into Oliver’s transition from vigilante to hero, and brought in characters who better complimented Oliver. Caity Lotz’s Sara Lance made for a formidible Black Canary, Emily Bett Rickards’ Felicity Smoak was rightly upped to series regular, bringing much needed levity to the show, and Manu Bennett’s Slade Wilson made for a villain whose antics left real, meaningful consequences for Oliver.

“Veep”
HBO’s political satire became a hit right out of the gate, garnering mostly positive reviews from critics and an Emmy win for Julia Louis-Dreyfus. But many questioned if the first season of “Veep” struck only a single note.

“Meyer was simply too pathetic in that first season,” wrote Slate’s David Weigel. VP Selina Meyer was always a bridesmaid, never a president. With the start of the second season though, the Armando Iannucci-helmed series saw Meyer winning for once as she scores major points while stumping for candidates in the midterm elections.

The insult comedy that fans came to love in Season 1 was still readily available in Season 2 but the one-liners went from blue to solid gold in the series’ sophomore season and made “Veep” an easy choice as one of the funniest shows on television.

“Ray Donovan”
The Showtime series’ second season will come to a close Sunday, but “Ray Donovan” fans have already deemed the last 11 episodes as a major improvement from the show’s freshman year.

Jon Voight is a powerhouse, giving a performance that will undoubtedly earn him his second Emmy nomination — and he might just win it next year.

“Donovan” also earned its highest ratings in Season 2 with the upcoming finale having the potential to boost that bench mark even higher. The grittiness of the family struggle following Boston’s church sex abuse scandal remains in Season 2, but with the heightened realism that was often times lacking in Season 1.

“Hannibal”
With a classic procedural set up in its first season, “Hannibal” came back ready to take fans deep into Will Graham and Dr. Lecter’s relationship. Gone was the weak killer-of-the-week format. It was time to turn “Hannibal” into the drama it needed to be if it wanted to survive on television.

Season 1 was met with some critical buzz but ratings were less than stellar. After getting NBC’s stamp of approval with a renewal, “Hannibal’s” second season featured deeper story while still offering even more murder.

“The Bridge”
It’s not easy adapting a Scandinavian series for American television but somehow FX’s “The Bridge” made it work. Ratings were fair in the first season but the show was renewed and came back strong in July.

After focusing Season 1 on hunting down a killer, showrunner Elwood Reid admitted he was getting bored with his own series. But since episodes had to be as close to the original series “Broen” as possible, Reid and his staff didn’t have much choice – until Season 2 rolled around.

Now “The Bridge” is free to create its own storylines revolving around Detective Sonya Cross and Detective Marco Ruiz. Fan response is proof that the series has crossed the border from good TV to great TV.

“Parks and Recreation”
Debuting as a midseason replacement on NBC, “Parks and Rec” only had six episodes to bring the funny in their first season. And they did, sort of.

The Amy Poehler-political satire came back strong in Season 2, both in premiere ratings and in laughs. They also returned with a steady take on topical issues, including same-sex marriage, legalized marijuana and publicized political sex scandals. The town of Pawnee became a character in itself, generating people and problems that offered some easy giggles while the stars of the show still provided the hardest laughs.

Critics went from wondering if “Parks” would thrive to knowing it was exactly what NBC needed on Thursday nights. Must-See TV, without a doubt.

“Buffy the Vampire Slayer”
From a cult movie to one of the most popular cult favorite TV series of all time, even “Buffy the Vampire Slayer” had a couple of roadblocks to overcome on its journey to becoming a pop culture icon. Season 1 of the quippy supernatural teen drama sometimes came off a bit silly and was still searching for the right balance between funny and insightful.

By Season 2, “Buffy” got very real. By digging in on the Angel/Buffy relationship and its inevitable tragic consequences, the show hit its stride and then some. The one-two punch of “Surprise” and “Innocence,” where Buffy and Angel’s first time turned him back into the mass murdering vampire he once was, is perhaps among the best two hours in the history of television and it’s hard to imagine the arc being brought to a more satisfying, devastating conclusion than the two-part season finale.

“The Simpsons”
Fox’s first animated series has jumped many sharks since debuting in 1989 after getting its start as interstitial shorts on “The Tracey Ullman Show.” Now the longest-running scripted show in the history of television, the first season of “The Simpsons” gave fans many memorable moments but the jokes, the animation and the cast voice-overs were still far from their peaks.

In Season 2 though, the yellow-skinned family hit their stride and became one of the funniest and smartest shows ever written. “Homer vs. Lisa and the 8th Commandment” won the series an Emmy. The number of guest stars more than doubled between the first and second seasons as well with celebrities such as Danny DeVito, Jon Lovitz and Dustin Hoffman lending their voices to the show. Season 2 also marked the first time Phil Hartman’s soon-to-be-classic character Lionel Hutz appeared on the show.

By the end of “The Simpsons'” second season, it was clear the Fox comedy had begun their golden age, an era that would last until around Season 10. The 26th season will air on Sept. 28 with no end in sight for the animated show.