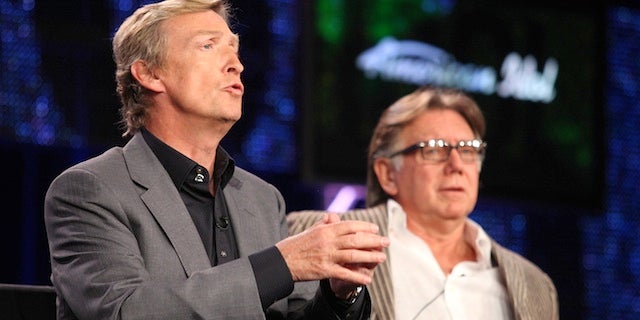 "American Idol" is firing longtime executive producers Nigel Lythgoe and Ken Warwick in a continuing bid to win back viewers and shake up the show, an insider with knowledge of the show told TheWrap.

TheWrap was the first to report in early May that there would be major changes next season, including the executive firings and a wipe-out of Season 12's judging panel. (Since our report, Randy Jackson, Nicki Minaj and Mariah Carey have announced their departures, leaving only, at this point, Keith Urban.)

Lythgoe and Warwick launched the show together during its inaugural season in 2002 and also worked on its predecessor, Britain's "Pop Idol." Lythgoe left "Idol" in 2008 then returned in 2010.

Their terminations from the show arrive amid flux for the talent competition after alternative programming chief Mike Darnell's sudden Memorial Day weekend exit.

The new judging panel was aimed at assembling three former "Idol" contenders, including Jennifer Hudson and Kelly Clarkson, but that plan appears to be in a holding pattern since Darnell's departure and a lack of someone at the top to make the final decisions, a senior executive with knowledge of the production told TheWrap.

"We can't make any moves on 'Idol' without someone in there," the executive said.

Fox's search for Darnell's replacement is ongoing and the network has even extended it to overseas, the insider said.

Darnell's exit and the pending departure of the top producers makes for a confusing mix at the top of Fox's ranks, in addition to what the executive calls "dysfunction" between the network and "Idol" producers, FremantleMedia and 19 Entertainment.

For example, a deal already has been hammered out with Oscar-winner Hudson — one individual with knowledge of the negotiations told TheWrap that she would receive a $5.5 million salary while the executive said it's more like $4 million.

But Fox has yet to actually execute the contract.

What are they waiting for?

First, there's the absence of a top unscripted executive to give his or her thumbs up. Second, they're waiting on Clarkson, the show's inaugural winner, who's arguably its best example of how a win on the Fox competition can mean not only hits but longevity in the business.

Clarkson has been floated as a candidate since the news broke in May that "Idol" was looking for a panel of alums for Season 13. Both insiders confirm that she has been contacted by the show to gauge her interest, though her reps confirmed again on Tuesday that "Kelly is not doing 'Idol.'"

We also hear that Adam Lambert and Clay Aiken, two other names floated as possible former contenders-turned-judges, have not received offers. Though one of the individuals we talked to said that if the show actually moves forward on an all-alum panel, then Lambert is the show producers' top contender.

Another option would be having just one former contender return — maybe keeping Urban and finding one or two other artists. And by the way, if the show does decide to go with just one alum, then Clarkson makes better sense as the No. 1 choice, which may further explain why Fox is holding off on fully executing Hudson's agreement.

This is the debate that's raging pending Darnell's replacement, according to the insider.

The show reboot comes on the heels of its lowest-rated season of its run. Although the series is still one of the most-watched shows on broadcast TV, Season 12's ratings fell more than 20 percent over the previous season.